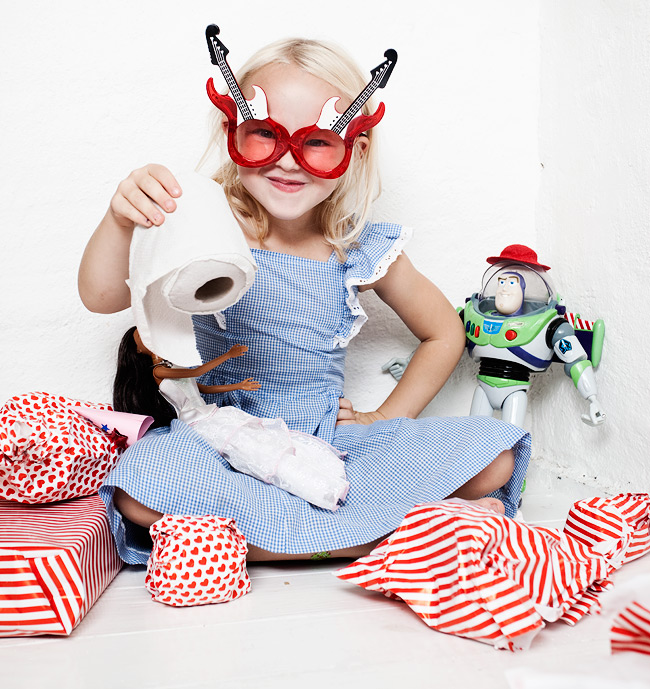 None of you readers have asked me about my To Do list of September. That does not give me the feeling you don´t like my lists that only gives me the feeling that you are all very polite.
I thank you for that by posting it now. Along with the October.

Here are some things I´ve been doing lately to keep me on my toes.

Christmas Rehearsal!
Have your kids started talking about Santa yet? Mine have. They go on and on about what to wish for and how to wish for it. For my 2 year old I know that the unwrapping is the most exciting part about it. Much more than the actual gifts. So on the greyest of October nights we trow a Rehearsal Christmas Party. We simply wrap some stuff from around the house and give them to each other. All in the name of  good traditional family fun!

PS. Photo of Thea posing in our Party Book.

Be a good sport.
Most kids are used to getting dressed up by their parents but how many parents can says that they let their kids dress them?

Last week I was in a aweful mood. I could not handle any of the everyday things. So I said: ” I am just going to sit here and you can do what ever to me as long as I don´t have to do anything dull like make dinner or do the washing.” Viola took the opportunity to give me a look that matched my mood. And that actually improved it very much.

Photo Note: Me, styled by Viola to the left. To the right Viola as Little Red Riding-hood with the wolf on her lap. PS. she has styled me before.

Remember Summer!
It will be a while until it comes back: summer. So get some pictures developed that will brighten you spirits all trough out winter.

Photo Note: Us at Tivoli in Copenhagen.

Embrase Halloween
Some people don’t need an excuse to dress up but if you do then Halloween is you perfect ticket to a more ridiculous lifestyle.

Photo note. Me swimming in Ibiza.

I love your lists! And y’all have a party book?? Is it on Amazon??