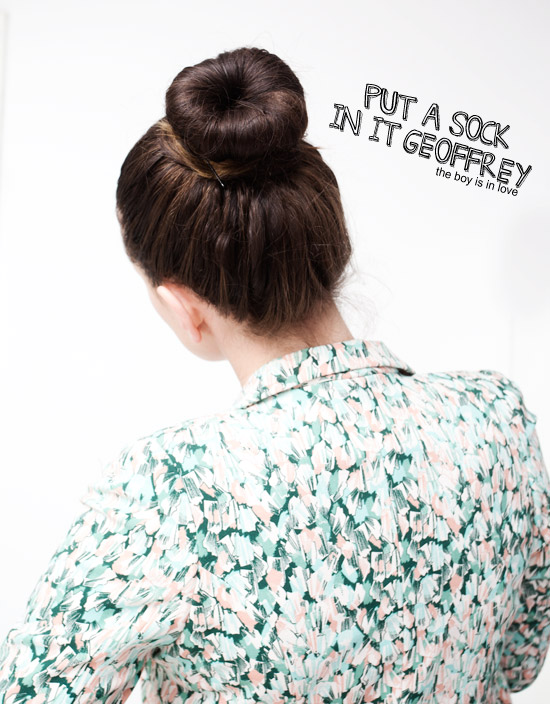 Here´s my  To Do List of this month. If you like it , I´ll make one in February too.

This is how I put a little pizzazz in my January.

Browse your own shelf!
There are so many nice books just sitting there, I´m sure, in your own shelf. Get a big stack of them out and sit down with a snack and a cup of coffee and give them a good look-through. This is nice especially when it´s cold and nasty outside.

Reinvent yourself!
January is all about a fresh start, right?  And it does not have to cost a dime. Just youtube yourself a new hairdo. I did and have been wearing this sock-donut-bun ever since. (soon I have to reinvent myself again and then I might look like this!)

Useful youtube search words to get you started: “hair tutorial” PLUS any of these “bun” “short hair” or “long hair” “bow” or “braid”

PS. Do you know who Geoffrey is?

Watch TV with you kids!
As a kid I loved when the whole family gathered in front of the TV together. All focusing on the same thing, laughing and being entertained together is nice. It can be any kind of show really but “January is a good month for something old” I said and Viola was up for it.

The Swedish library is the Go-to-place if you want good dvd´s that are not on the top 100 list. We went there and came home with “Kullamannen” a black and white kids thriller mini series. Love the format of “mini series” 1 hour long episodes that you can watch every night until it ends. It gives me the same effect  as a good book does: It lingers with me during the day and Viola and I ask ourselves “what do you think is going to happen next?” and “Who is that crazy dude with the hat? ”

So hook yourself up with something thrilling to watch with your kids. And NO your (i)Phone is not invited!! (that´s really the point of it all. FOCUS people!)

Kullamannen has a great intro. Check it out above.

Hit the BIG sales-but don´t over do it.
Lots of stores have big sales this month. At least here in Sweden. But  don´t get carried away by those low prices. Buy something that you REALLY want. Not 17 things, that you “kind of” want, just because it´s cheep.  I found this Slinky dog that completes my Toy Story collection. Made me happy and did not cost much. At BR leksaker.

Put a sock in it Geoffrey = Coming to America with Eddie Murphy. One of my favorite films of all time… :)

Jennys answer: Tricia! I am so glad you know that line. Me and my sister say that to each other all the time. we too love that movie and have seen it so many times. it great! Thanks for telling me =)

Ahhh I didn’t get the sock ref… now I do!

Love the idea of revisiting your own bookshelf. Refinding things is the new buying things I think :)

I love the sock bun! I don’t have very long hair, but I did manage to look like Princess Leia by putting side pigtails into sock buns. It was quite fun!

Zoe: Yes!!! I think it is the new shopping too.

Camilla: Yes camilla the iPhone, so tired of me being so attached to that damn thing.

love the list! I sure need to get better at almost all of the things on the list!! but I do also have a giftcertificate for BR (i danmark hedder han Fætter BR) and I have not been able to find anything good -think I am gonna go look for a slinky!

Mette: Yes me too. I need to get better at it all. it helps to make a list. and I´m glad you like it. have started to work on the feb.