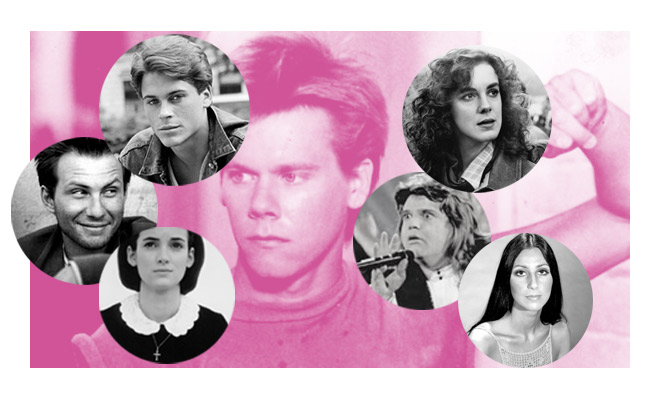 Do you remember the Kevin Bacon game?

That´s what we used to call it when I was a teen in the 90´s and back then I was really good at it. I could name actors left and right. I even knew small parts like the girl who drives the ferrari in National Lampoons (Christy Brinkley) and that DJ Tanners neighbor Kimmy Gibbler was played by Andrea Barber. But since then my brain has aged and decided that there is just not room for such info anymore. Nowadays I don´t even know the name of the guy that drives around in a car for a whole movie (IMDB: Ryan Gosling) or who´s the actress that the amazing Spider Man falls in love with. (IMDB: Emma Stone). (No not Kirsten Dunst, she was Spider Man´s girlfriend when Tobey Maguire was the boy behind the mask, there is a new Spider Man in town now with a new actor that I don´t know the name of)

Anyway I try to play this game as often as anyone is up for it, mainly because it gives me the perfect excuse to talk about my favorite subject: TV-stuff.

If you haven’t heard of it, this is how “6 degreen of Kevin Bacon” works you simply pick one actor/actress for your opponent and then he or she has to connect that person in as few steps possible with Kevin Bacon. Maximum of 6 steps. Since Kevin Bacon has stared in several movies there are often many ways to connect him with other people like this:
“Ryan Gossling” okay that would only be 1 step because they stared in “Crazy Stupid Love” together. That makes Ryan Gossling´s Bacon number:1.
Let´s try something harder like my favorite bad boy:

(6) “Christian Slater” I love this guy mostly because of his “Jack Nicholson -eyebrows” but also for his destructive love affairs on screen. As the one with Patricia Arquette in True Romance and the one in Heathers with the wicked Winona. Which brings me to the next connection:

(5) “Winona Ryder” I´m repeating myself here but I LOVE HER! (sorry, didn’t mean to scream). Via the movie Mermaids I can connect her to Cher.

(4) “Cher” Oh she is really something. Cher has played some great characters on the screen like “Rusty” in “Mask” and one of the witches of “Witches of Eastwick”  these movies may connect Cher quicker with Kevin Bacon, but instead I´ve decided to go via the music video with the duett “Dead Ringer For Love” so I get to talk about the oh so charming Meatloaf.

(3) “Meatloaf” I can´t stop looking at this guy. There is so much passion in his body language that he has me mesmerized. It reminds me of Jack Black´s Tenacious D performances and gives me the same buzz as when I watch Freddie Mercury start Radio GaGa at the LIVE AID. Congrats Meat Loaf for being so awesome! Meatloaf played “Tiny” in Wayne´s World which connects him to Rob Lowe.

(2)”Rob Lowe” played the douchebag in Waynes world where Meatloaf played “Tiny”.  But let´s talk about Rob´s earlier roles when he was nothing short from lovely. The movie Youngblood will always have a special place in my brain. Watching him and co star Patrick Swayze skating around (among other things) made me realize I was straight. (The movie “Dirty Dancing ” with the same lovely Patrick is often picked when I ask people about those kind of realizations).

Okay Jenny you are rambling… Back to the game: I´ll connect Rob Lowe to Elizabeth Perkins via the movie “About Last Night” (remember? she´s Demi´s girlfriend).

(1) Elizabeth Perkins is such a star. Great in BIG and also in the TV show Weeds. She stared with Mr Bacon himself in “He Said, She Said” which gives her the “Bacon number 1”

If you can connect any of these to Bacon in fewer steps do let me know.
Have fun

PS. Want to read more from this TV-disoriented brain of mine? Click below
3 people on my mind and on my TV

and here are a few of mine “watch TV with your kids”-posts:
Hairspray
Tom and Jerry

– but I thought the 6 degrees of kevin bacon was that everyone in the world could be connected to kevin bacon in 7 steps. Like you know me (1), who knows my mother in law (2) whos is best friends with conan o brians mother in law (3) who probably knows or met (4) kevin bacon?

Isabelle McAllister
– In reply to: Adam

This is fantastic news Adam!

Jenny From DosFamily
– In reply to: Adam

Love it! Thanks Adam!