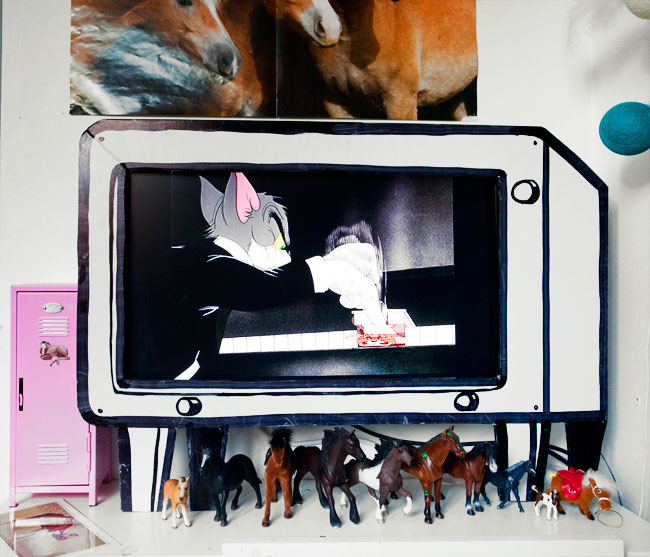 Viola and I watch plenty of TV and every now and then we do watch it together.  Read more on my previous post on the subject. Here I will recommend yet another show to watch with your kids:

Tom & Jerry– Our family can not get enough of these two hotheads. And with episodes running for less then 10 minute they are perfect for us with short attention span. And we watch their never ending quest for revenge several episodes at a time.With over 100 shows to choose from “The Cat Concerto” must be one of the best ones.

As we watch it we speculate on how the masterminds William Hanna and Joseph Barbera and their team might have talked about the episode while making it back in 1946.  Adding things to the script while listening to the song over and over and over again? Standing up in excitement, pausing the record player shouting:
“Right here (3.45) Jerry should place a mousetrap on the piano” The colleges nodding, smirking and agreeing “Excellent“
My favorite part is (3.25) when Jerry tries to cut Tom´s finger using a pair of scissors (that he apparently found inside the piano).

This 6-minute long masterpiece is full of creative ways on how to get you ass whooped using a piano.
It leaves me totally exhausted every single time.

Also: you know the MGM Lion that roars in the intro, the one you´ve seen several times? I found some nice behind the scene pictures from the recording with the lion. Also some picture with Hitchcock and Leo.

Now go get you kids and show them the awesome clip above! Sorry for the super annoying squeak at the start of video, but it was the best one I could find)

PS: Click here to see how we made the frame for Viola´s TV

the cat concerto tom and jerry

thank you for give live cartoon for all kids of world for more you can visit tomandjerry.asia