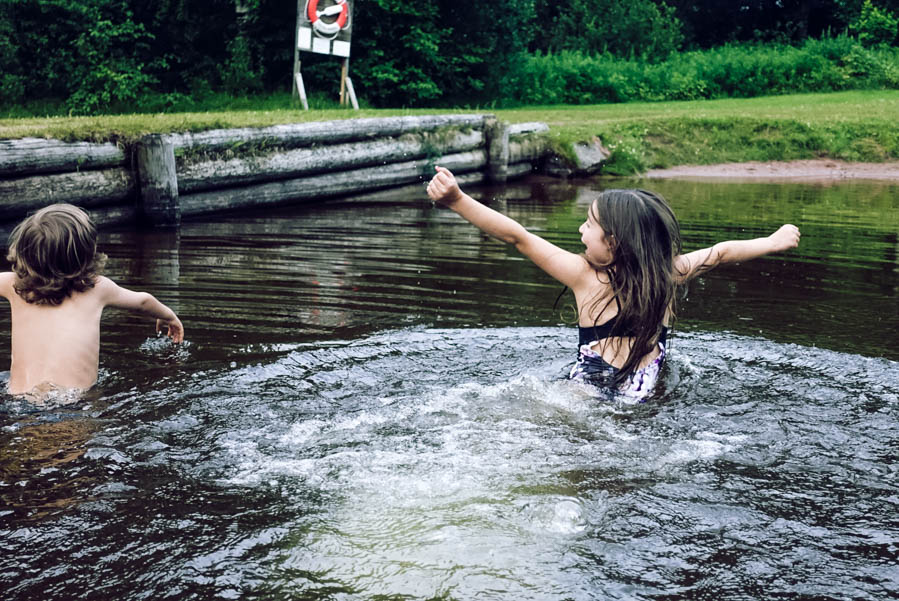 Vacation life – isn’t it beautiful?! Thank God we had a couple of weeks in Italy with some sun and heath (those photos will come up here on the blog shortly – there was lousy internet in Italy). But here in Dalarna it’s rather cold. But green and beautiful. Well we where still up for a swim or should I say the kids. For once I just watched them play around. I always liked to swim but then some years ago I started to chicken out but after that I just realized that it was pretty much in my head. I just decided now that I will swim. An as you say in Sweden – you never regret a bath.

I’m sure I showed this place before. It’s our best spot. With a 8 meter tall jumping tower. It’s at Västannor tjärn outside of Leksand. I just love it. I think it’s so beautiful with the wood and the little lake. Last night we had the whole place to ourselves!

We also have some friends over from Stockholm. Yonis & Leyla. My kids have known them their whole lives and they have been at the same kindergarden and school together. It’s such a privilege to have them around. To watch them grow up side by side with our kids. <3

It doesn’t help the feeling of cold that the water is almost black.

The summer hat is on. The one we got from Jenny like 7 years ago – remember? Same guy, same hat – this link.

Love this happiness and cold – fellings all over.

Beppe just climbed straight up to the 8 meters and jumped from there for the first time. We were all a bit chocked. He was so damn happy he made it.

Warm or not – tomorrow we will be back again!
see ya!