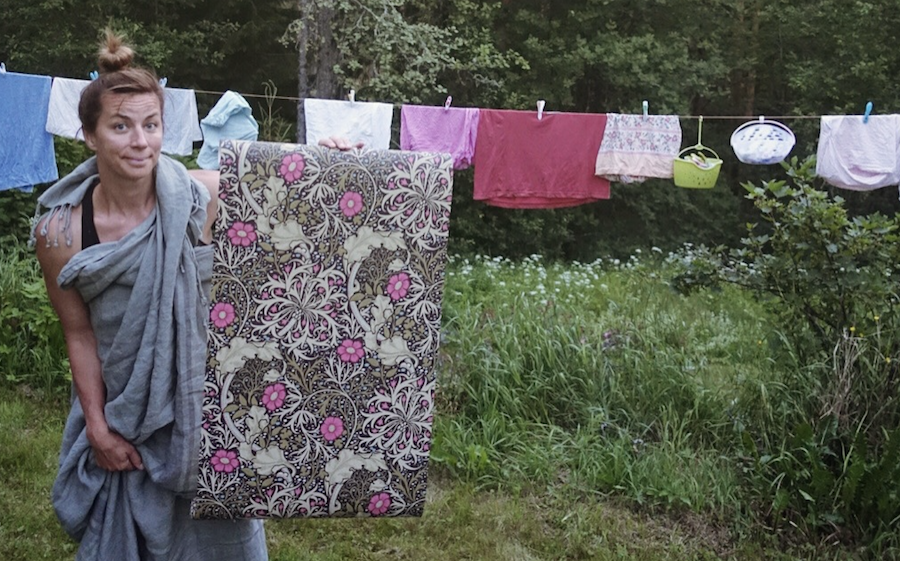 I’m at our cabin and we have a little guest toilet on the second floor. It’s been leaking so I had a plumber removing it a month ago when we where here the last time. The basin was also gigantic so I was thinking of an upgrade. Found this little corner basin second hand and was very happy. This little room had a terrible and disgusting plastic floor from the 70’s. The wallpaper was kind of cute but started to fall off the walls so you know it was time to do something about it. But I kind of forgot about it and when we came back here I suddenly texted the plumber to come back before their holidays, to fix the new basin ( I had the tap blasted – to get rid of the chrome and to make them look more old) But I had forgot to put new wallpaper on the walls and it needed to be done before the plumber came back.

So yesterday 5 minutes before closing I found myself at my local paint store – Colorama Leksand. I thought maybe they had some nice wallpaper stashed somewhere. I found the lovely owner Annsofie who brought me down to the basement and we found one roll of a cool William Morris Seaweed. Lucky me that it all got fixed! Mood boards and all that is apparently not for me.
But I had to stay up all night to get the little room made.  Anyway in the middle of it all I’m talking to my dad on the phone. Discussing what to to about the old linoleum floor. If you paint it, when it’s that old the paint can easily rub off. But dad convinced me to just get it all out. Always nervous to do it because you never know what is underneath. But I got lucky – the floor was perfect and very beautiful old broad floorboards!

The only thing is today with the plumber we realized that one of the taps was broken and leaking so now I have to buy new ones but they are soooooo expensive. And because it was an old basin he probably had to stay here double the time. Also very costly. Damn it. So if I had bought a new basin and taps it would have been quick and much cheaper.
But now it’s gonna look great. We will poo as kings & queens…

I’ll get back with more “after” images from the room soon!