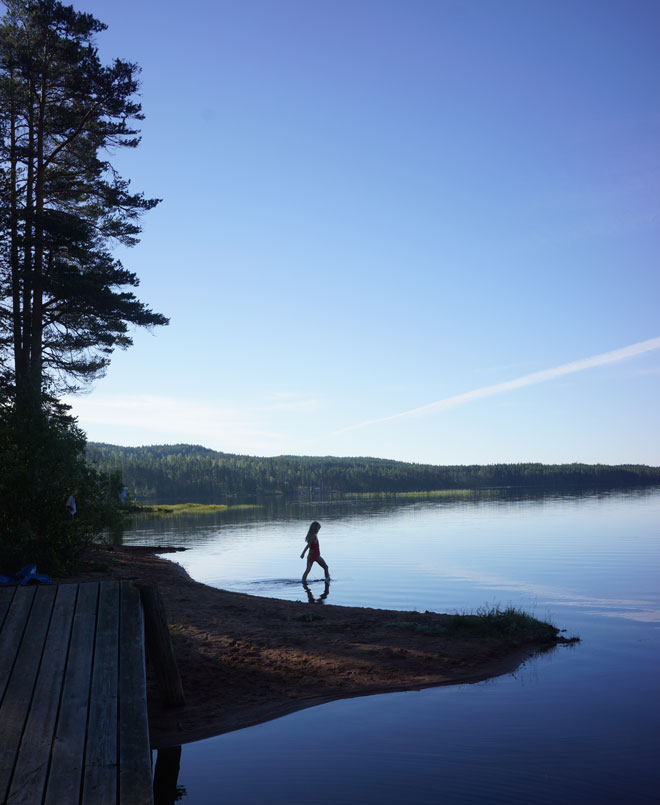 After hanging in our house for a couple of weeks we needed some adventure so we borrowed the neighbors tent and took off. The happiness I feel just sitting in a car and going to unknown destinations is not of this world. Yeah we where just going for an half an hour,  a couple of miles away but still. Not knowing what and how was great. I believe We do lots of things with our kids but life in a family can still get a bit conform. I love that as well but I also need to shake it up sometimes even if it is just for a day.

We where told about this pretty little lake. There where supposed to be a camping place and a little further away we found a perfect spot for us. We where all alone surrounded by water. In my heart I feel like an adventurer – a jungle woman with survival skills but I don’t think I would last a couple of days like Crusoe. And I’m getting more and more comfy by the day and even worse with the years. But it was fun and we all did well hence being newbies.

Pretty nice view! Today I heard there are leaches in there. They didn’t get me though! Phew!  Every time I think about leaches I think about the movie Stand By me. I watched it so many times as a kid. Do you follow tv_with_jenny_and_jens on Instagram? You should! Watch their Stand By me scene here.

Since the weather was fantastic and we didn’t really planned this trip in advance. I’d cooked some food we had at home and brought it along as on a picnic. Basically we brought everything worth chewing on. There are bears in the woods but no one that I know or have met up here have every seen one so we didn’t hang our food up in a tree. Maybe that’s somethings they do only in the movies? I believe everything I watch.

Even the blueberries were ripe. And very yummy.

Della is our fisherwoman. When I tried the casting rod – it always ended up in the tree behind me. But that’s fine. I rather like the fish staying in the sea.

The lake is surrounded by eskers which makes the nature dramatic and fun. Highs and lows.

Beppe took his pants off at seven cause he wanted to go to bed. Something that have never happened before. But with all the excitement he was out at around eleven. I guess first night in a tent made some rather bonkers…

And others rather zen – like. OR maybe just brain dead.

At 0200 I woke up and went outside. It was all foggy and something was making a weird kind of Vuvuzela animalistic sound. I have no idea what kind of animal it was- sounded funny and strange. And luckily small.

I dreamed about 150 bears surrounding the tent. Totally at ease… I remember the first night when I back packed around South America – some ten years ago and slept in the jungle for the first time (for real!! but it was in a village in a proper bed, inside a house) but all the sounds over there. Sweden is so quiet if you compare it to the Brazilian Woods. At the time I thought snakes and lizards and other slimy cold things would creep into my bed. But this time no bears and in Brazil no creepy things. Not even cockroaches. I could just enjoy the full moon.

During the night our airbeds lost all the air and it got very cold. I can’t say I slept like a baby but it was still great.

This one never stops swimming.

My boys in the morning.

Close by there was this Slogbod, It’s a hut with a fireplace outside. Inside some swallows had a little nest. So we moved far from it to give them some space. The sound the make when they swooosh by and the way the fly is amazing!

Beppe is making toast. If I knew there was a fireplace – I would have brought a more grand breakfast. But that’s kind of part of the game – camping and keeping it simple goes hand in hand.

Yes we are the real MacGyvers now. Or maybe at least on our way. Something I can happily say now when I’m back in front of my computer. But I guess thats the thing. You don’t have to go all in. Camp for a week and do it full on. You can go away for a day and then do it soon again.
But I enjoy the idea of knowing I could handle more nature. Getting more outdoorsy. In the same way I want to be able to build my own house (getting there as well).  But maybe I also need to learn how to cook properly and for that I don’t really have any patience.

Some more fishing before heading back home. And no we didn’t catch any. And no mosquitoes!
In the same way being out skiing all day – camping also makes you feel like a parent of the year. Rozy cheeks, being outdoorsy, poor mobile coverage all adds up to that award. Yeah there was some whining at times but far less than any random normal day at home and the sleeping didn’t match a fancy hotel but we all agreed we have to do it again. Some time soon.

Isabelle McAllister
– In reply to: R.

WOW !!!! I want to make camping in Sweden !! {this is the first message from a french blogger … i LOVE your blog but i never leave a message. Now it’s done!}

Isabelle McAllister
– In reply to: elodie

Oh Elise! So happy to hear from you! And thanks for Sweet words!! Xx