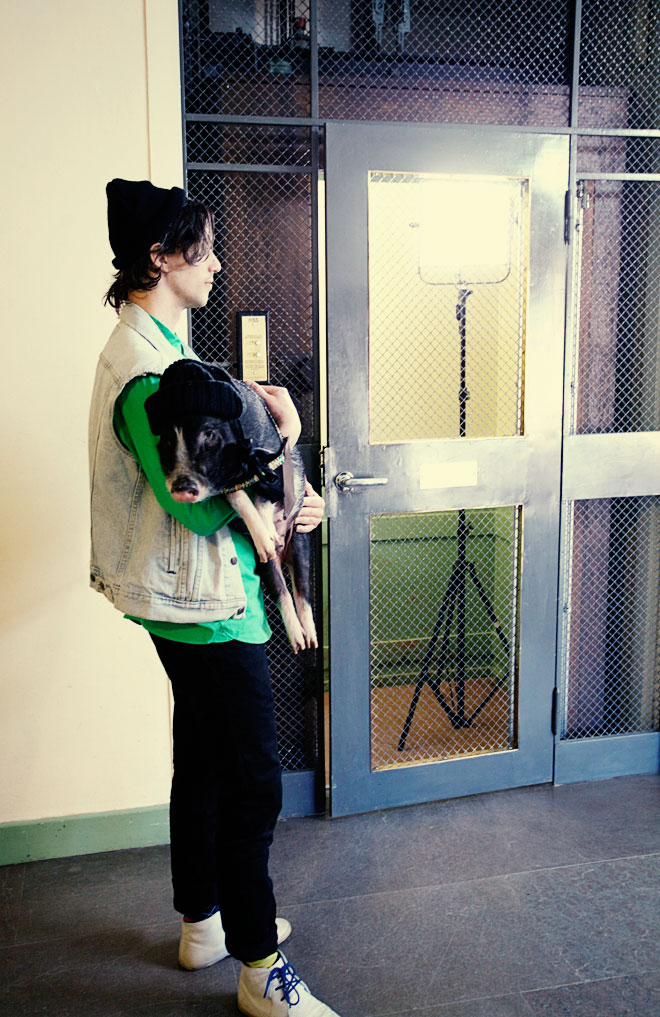 Jenny showed us the excellent – this is how we work at home- she and Jens acting before he draws his illustrations. At our house we more use the apartment as a location for different stuff. Yesterday I sat in my bedroom working while they where using our building and livingroom to tape some new sketches for the TV show my husband Erik is working on as a comedy writer. It’s called Partaj and shows on Kanal 5 here in Sweden. I thought I was going mental since I head this weird noice – like from the zoo. Here in the middle of town!!? Until one of the crew members passed my door talking about THE pig. I had to run out and I found indeed a real pig in my house! A pig with a hat!

These are some of the sketches that the pig is going to be used for. It’s called – meanwhile on Södermalm. We live in Södermalm, in a part called SoFo (South of Folkungagatan) and is known as where all the trend anxious hipsters hang out.. I mean just the word Sofo – why use an English name. 10 years ago I thought it was the stupidest thing ever but as with all things I have gotten used to it!

Also Maria Montazami one of The Real Swedish Housewives of Hollywood has laid on my bed – there is a lousy copy of the sketch right here – otherwise head to Partaj on Kanal 5.

And this I have shown you before – when I made the rabbit bed for Della when she was in my belly!

This last clip is not from my home but it’s with my hubby Erik. He plays a Norwegian gym teacher. It’s in Swedishnorwegian kind of play language. Very funny. It’s always been a old rivalry between Norway and Sweden like mostly between adjoining countries. Sweden and Norway no exception to this. It’s also from Partaj.

We have been doing much more filming here but since there always seem to be a problem with the rights they are not to be found on the net at the moment. But I will keep on looking.

A pig!! Farmlife in the city.
And Erik is the best

The sketch about södermalm – so funny! even if you don’t understand any swedish. it could be a sketch about neukölln – which is obviously the berlin counterpart of södermalm.
probably because a lot of of swedish people live there ;-)

Isabelle McAllister
– In reply to: Fenke