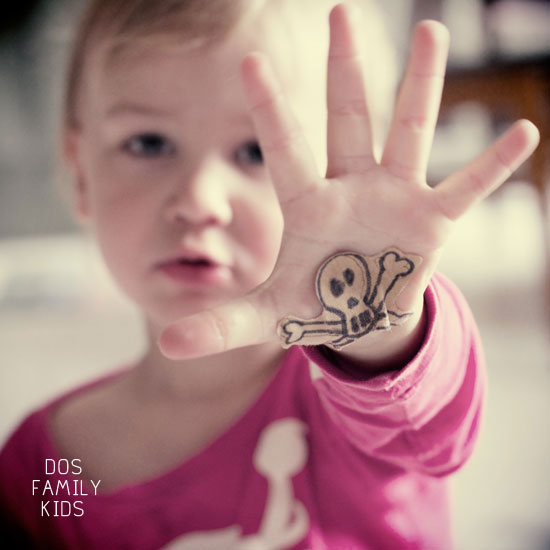 This is such a simple thing but works magic. Just take an ordinary adhesive bandage and write something on it with a permanent marker. Cut it out and Voilá – a super customized band-aid extra ordinarie!

We also did a Batman band aid in our book. It was for the super hero party.
It was part of this survival kit for the superheroes.

The idea was to pack a bucket with all the things you need on a party (and for the woods). Then we hung them high in the trees for the small party animals to collect.
And also so the bears wouldn´t eat all the treats!

Update:
So I originally wrote plaster customization but I just google translated plåster and that was the translation I got but then Theresa helped me out. It should be adhesive bandages or Band aid. Woops.

Hej Isabelle! Lite förrvirrad… Plaster? Plaster is a building material used for coating walls and ceilings. Plaster starts as a dry powder… Do you mean bandage (another form of a bandaid). That’s kind of what it looks like. If so, cool & easy!

Plaster is good too! Awesome. The forest looks incredible, such beautiful surroundings.

Hi! In the UK we say plasters, rather than band aid. So google translate didn’t let you down!

[…] brought this old Dardel tableau from our cottage. When we did the super hero party for the Alla Balla Kalas PArty book we put these on the trees in the woods. Jens painted on the glas. Love […]