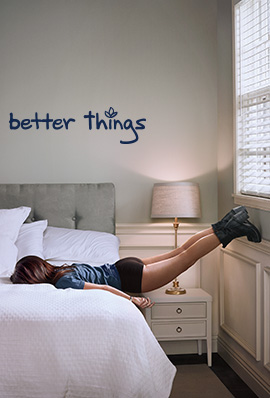 So I have been home ill like all week. Except for a little stunt – working in the City Hall Wednesday night. I’ve been watching so much bad stuff but also some good and now at the end found some excellent things that I want to share with you!

Better Things.
Plot – working actor mom in LA with 3 daughters. She is just coping with life and things, men kids, aging, work and crazy Hollywood. Its really really funny but still have depth and I love that is almost all women in the show. A show made by women and starring women plus Louis CK (he is credited as one of the creators.) You are in for a treat!

This is Us
Plot: Apparently we all share our birthdays with at least 18 million other persons in the world. We get to know 3 people with the same birthday and how they are connected. This is also a series about life but more of a feelgood. A nice portrait of a family and different things that happens in life. I really liked this series as well.

13th
13:de tillägget på svenska – Netflix
This is a well made documentary about racism, class, race and politics in the US. What happened after the slavery “ended” and why is so many Americans in prison? And then why so many black people and latinos? Actually 2,5 million prisoners (in the 70′ there where about 350 000). It’s a frightening story on how the world works and even scarier now with Trump raging.

Before the flood
Leonardo DiCaprio goes around the world, talks to people, scientist, politicians, businessmen about the climate. What we can do to turn this around, to help the world but also to show us what the hell we are doing. It’s worth to watch this even if you think you know whats going on. The full movie is embedded here.
Things you can do right now that effects the climate:
Eat less meat
Don’t buy stuff that has palm oil in it.
Don’t buy too many new stuff. REuse and fix what you already own.

The night Of
You know some series just stays with you. This one is like that. Unbelievable well filmed. So many shots are pure art. It to do with how they frame some scenes. And how the focus is not on ie the one who talks, itäs on something else but still works. So beautiful.
Here you can watch one scene with a map. And here with the cat. Actually if you watch this scene with the cat you see how you see the dogpound but only the room not the details, you just hear them. And then how the focus and framing on when the assistant from the dogpound is coming the focus is on Turturros arm. Just beautiful says the nerd in me.
The plot is a crime drama about a murder and a night in NYC. Turturro is doing an excellent job as a lawyer. And also Riz Ahmed as Naz. The series also highlights the faults of the American justice system.

Also worth watching:
The Fall
Season 3 is just up on Netflix. I kind of hate/love this one. Is kind of so slooooow. But still can’t stop watching. Dunno if I like the ending. But Gillian Anderson is so cool.