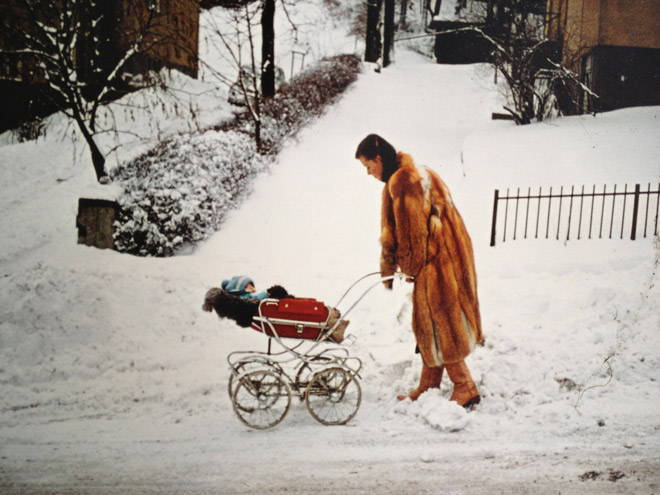 This is my mom & me when she was showing her foxy swag in the late 70’s. (and no I don’t concur with the fur but think it’s a crazy photo)
My mom is born in what used to be Belgian Congo but raised in Belgium. Alot can be said about that history but it will be in another post. My father met my mom in Mallorca. She won the trip in a drawing competition and he was there going bananas with his friends from Sweden. Then she moved to Sweden got married and had me. I guess having a small kid in a wintry Sweden was a bit of a surprise. She’s back in Belgium now.

A week ago we had elections in Sweden and the extreme right party has got like 13% of the votes and are now the third largest party. It’s a total chock. Not that we didn’t know they where gonna get big but not that big. That at the end people would be voting on a party that has proven being not only racist, anti women and anti gay but also has members who are hating openly and being physically violent in the streets. Most of the comments from their voters comes down to we are not looking out for the Swedish interests, the refugees are costing too much money – they are our problem and then most of them say I’m not racist but we have to preserve Sweden Swedish. In Swedish called bevara Sverige Svenskt.
I don’t get this at all? What is the meaning of this? What is pure Swedish?  Who is a foreigner anyway?  I just want to know where are the boundaries are drawn.

I happen to be born in Sweden. It’s just a great coincidence. I also happen to have brown hair (that I can color) and I have a funky foreign name as in McAllister due to my hubby (my born name was Isabelle Halling – Halling is a Norwegian traditional dance for men – they performed it on the opening act of the Olympics in Lillehammer). My skin is white – also a bloody coincidence. I have all those things going for me. Not everyone is that lucky. I’m Swedish but I’m also half Belgian. But I feel Swedish or mostly I feel Brazilian and think I’m a New Yorker. But yet I’m none. My kids are half foreign since my hubby is half American. but still we’re all Swedish. And we’re still the lucky ones in this big lottery of a world.

What bothers me most is just that thing of preserving Sweden Swedish. The idea that if we would close our borders and be more restrictive with refugees or people getting here we would all come to a better conclusion, get a better life – have more money in our pocket. But the problem is it’s not possible. It not possible to draw lines like that, should we stop going abroad as well? Close down Internet? Never drink a Coke again?
The whole idea of Sweden being a great country is because we have been good at protecting humanity. To take care of each other. Taking care of everyone. The whole earth is facing problems at the moment not only due to wars but also climate changes. I think we all need to help out. And yes, that is gonna change the way of how all of us is going to live. How much we need to buy, what choices we make and so on.
You simply can’t stop development. And the whole beauty in the world lays in the mixture, the influences and traditions that blends, interacts and reaches for new goals – together.

Well let’s just get some hopes up for humanity and the #heforshe campaign! Well done Emma Watson I salute you!

Yay for a good post ! Right now in Denmark the politicians are using Sweden as the bad example – do you want it to be like in Sweden!! Because Sweden takes so many immigrants compared to Denmark. Where as some politicians in Denmark want to close the borders even more.
It’s such a shame that the world is that way. I know it sounds naive, but it would be nice if we could just share. If we could be better at helping and not shutting people out. I hate to think of all the people in danger, that we are closing our borders to. So well done to Sweden for helping so many more, but sad that it has created such a huge growing hating part of the country.
Sigh.
Let’s all help each other out. Please.
Peace.

Too true! Sweden seems to have got so many things right, it’s a shame to hear that society is there too being influenced by the extreme right. I don’t know who votes for these parties, but fear-mongering politicians and media are clearly having an effect everywhere. This is really good post, thank you.

It’s hard for me to see the isolation coming up again. We live in Europe, we have the rights of free travelling, moving, working. We have to be solidary with refugees and all the people that don’t have the chance to live a life in peace. I was shocked when I saw a ‘black’ lady from (think it was) Uganda that lives in Sweden for about twenty years, promoting Åkessons fuc**** racist party. She is one of the immigrants the sd doesn’t want to join your lovely country. I always loved that feeling in Stockholm with people from all around the world, integrated in the society and living as Swedish in their hearts. Hard to see the change in Germany too, where a anti-Europe, homophobia party got about 10% in some regional parliaments. I don’t have the answer for getting out of that plight, although I’m a political scientist :(
Sorry for writing so much..but let’s kick that racist ass.
Best wishes,
Franse

Your so right!!!!
Tolerance, open mind, dialogue to preserve humanity!!!!

I’ve only just discovered your blog and love it, you are so creative. This post made me love it even more. Here in the UK I am hearing similar dialogues, here your words help connect us, not divide us.