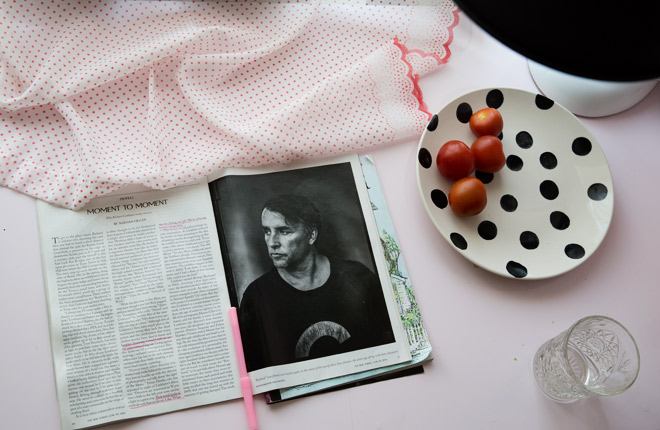 This is not a review of the much-talked-about movie “Boyhood”. I haven´t even seen it yet. This is just me talking about an article I read about it´s maker: Richard Linklater and why it makes me feel good.

My brother in law Spike left us a bunch of issues of The New Yorker. Yesterday I grabbed a stack of them and headed downstairs to our basement. The only place in our house that is cool at the moment. I loaded the washing machine and made room for me on one of my many couches. Before I sat down I checked the couch for spiders (it´s a really small couch, only two seats, more like a loveseat really), and pulled an old TV closer so I had somewhere to put my coffee cup. Behind the TV I found a bag filled with “missing socks” that had been gone for quite some time. “Great I´ll deal with them later” I told myself  but thought in my head: Make that much later Jenny. Who needs socks now anyway? it´s too darn hot.

Everywhere I´ve looked lately people are talking about this new movie Boyhood. And the first article I settled on in Spike´s magazines was about it´s maker Richard Linklater. It´s an interesting read about his way of work and of the making of Boyhood (which looks really good by the way). You can read it here: “Moment to moment. Why Richard Linklater makes movies”.

I´m always struggling with the “WHY” I do things. Why do I stuff a helmet with flowers for a selfie? or wrap myself up in a sheet for another one almost breaking my legs as I stumble to set the timer on the camera? Why? Linklater dropped out of school and took a job only so he could afford to write and watch movies on his free time. Reading about other peoples choices and way of work really helps me figure out my own way of things.  (and sometimes it even makes me feel less crazy)
Here is what I like about this guy:

Linklater stays put in Texas even though “everyone else” is in Hollywood making movies. If he has a meeting there he takes the morning flight and he goes  home straight after the meeting. He involves his kids in his movie making, and that seems to be fine. And he is not pretentious.
Actor Ethan Hawke is quoted in the article:

“Directors are interested in ‘If you turn a little to the left, your nose catches a light in a great way.’ Richard Linklater would puke if anybody said that on his set. Like, ‘What are we doing, an ad?’ We’re playing human beings here.”

Reading that last line made me scream of joy from my loveseat in the basement. If there would be any spiders this is when they would run and hide.

“aaaaahhhhhh!!!!!!”
Upstairs I imagine Jens and the kids hearing me scream through the floor boards, just looking at each other in understanding, shaking their heads and then going back to what ever they were doing.

My brain has asked myself that question so many times when I´m out working, photographing something or someone and the subject gets too messed with: Polished, brushed, tweaked, straightened, ironed, moved and improved into perfection.
I can´t stand perfect. But I keep forgetting that.

So to remind myself of this I´ve written that quote and taped it to the tiles of my kitchen. (see picture above). Now it will remind me everyday just like the sign on our door saying “FRUKT” is reminding Viola to bring a fruit as a snack to school.

Below is the trailer for Boyhood. Not only does it have Patricia Arquette in it but also  lots of scenes from “everyday life” in the US so it should be great.
Since I don´t like theaters (well I guess there is nothing wrong with the theaters really just the people in it) I´m waiting patiently until I can buy it on Itunes.

This clip makes me smile. I love how the kids are so dignified and the parent is all over the place (it reminds me of me talking to my kids).
The kids are played by Ellar Coltrane and the directors own daughter Lorelei Linklater.

My fear of spiders

I also keep forgetting how perfection is senseless. And you know what Jenny, you remind me of that every time I visit your blog! You are my Richard Linklater in that sense :)

Jenny Brandt
– In reply to: Katarina

Thank you so much for your comment.
Let´s flush perfection down the drain!

Have a great day!