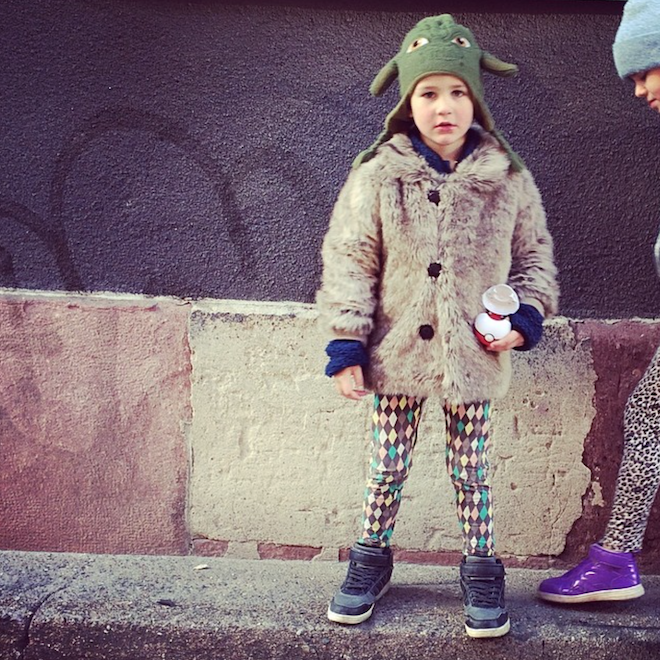 A friend send me a photo from a movie premiere we had gone to with the kids. Under the photo it says- Tv -personality Isabelle McAllister with her kids Bettan and Della. I couldn’t stop laughing. Bettan in Swedish could be short for Elizabeth but you also name old cars Bettan and many times people refer personalities a bit as Peggy Bundy as Bettan.
If you look at the photo below I think it’s Beppes facial expression, the fur, the hat and his colorful pants that makes is so funny along with that name – Bettan. Like an old little lady. I posted this on Instagram and many thought the same thing I guess.

But this thing also made me think about how easy it is to limit the kids for what kind of gender they have and what kind of things they are supposed to wear. I bought that fur for Della – years ago but she never liked it. I must admit it wasn’t top of my mind to fetch it for Beppe but when I found it on our attic I thought why not? And he totally loves it. Makes him feel like some sort of king or a bear. (Maybe I let him watch to many eps of Game of Thrones).
Those pants he loves as well and he dressed himself that morning before we went to the movies. But I think that’s why the magazine gave him a girls name.
I don’t care if the magazine didn’t look up the right name, or that someone thinks he is a girl. I couldn’t care less. And if you ask Beppe he’s gonna be mad to be given a wrong name not because it’s a girls.

Anyway- it’s still interesting to see how important it is for many people to both dress and judge kids based on their gender. Like that somehow would pinpoint what the kids like or what they are like. Instead of just giving them the chance to explore that whole spectra of what they can become!

My son Beppe is just a cool kid, that some days likes to wear a fur and colorful pants. This doesn’t make him less of a boy but I truly believe that it will make him less of a human being if I would compromise his likings simply because of his gender.

I also wrote about this in Swedish on Instagram but wanted to kind of translated here on the blog!
I know many of you feel like I do which is fantastic!
And I also want to thank you for all the comments about it!
xx
Isabelle

oh isabelle, do i hear you!! i also have a little guy with long hair and a taste for colourful clothes, stripes and squares all mixed up – influenced a bit by his big sister, but alot comes from him – wish people would just let it be! do we comment on how some grown-ups present themselves? the kids are at least honest and true to their likes and dislikes – anyhow…;-) viva la différence!!!!!
bises, gigi

My son constantly gets called a girl. A two he has no idea of gender roles. So what if his favourite colour is pink and he like to paint his nails. He also like cars and digging in the mud. He is who he is.
ps I think your son looks super stylish

That’s an amazing way to lead your children, if only all of us could have parents with such open minds :)