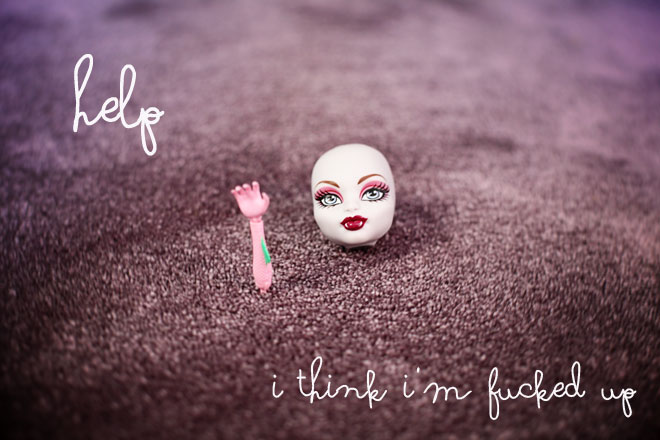 My daughter has been dying about getting a Monster High doll. She’s been craving it for over a year. I don’t know where she got to know about it in the first place since it doesn’t run on Swedish TV but like all trends they find a way to the brain in one way or another. We hadn’t bought it since she pretty much stopped playing with dolls or never really started- she has simply been collecting them. Anyway after being away for a weekend. Me and hubby bought this Create a Monster High – doll set. Or at least that’s what I thought. But the thing was that it had everything except upper arms, thighs and “hair”. So we bought a doll for about 300 kronor/ 40 dollares and she couldn’t do anything with it. It was just parts. And yes, if I knew the deal about these dolls I would know about reading the fine print that said it was an add on pack. So since it ws a gift I couldn’t or wouldn’t just leave her with a worth nothing doll so I had to go to another toy store and buy the first real create a monster set for another 400 kronor/50 dollars. I have never bought a toy this expensive. But the thing with this original pack is that it also comes incomplete. There are two dolls but only one pair of shoes and one set of hair – or in another only one dress etc. So now she has 4 incomplete dolls and loads of hoover friendly parts. And this is when I start to get angry.

I know it is my choice as a parent and a woman to buy this kind of toys but I till think it’s a scam. And I will mos def think harder the next time. But not only do I rip my hair out about the way it’s sold. How more I think about it I think these dolls are awful in so many ways.
At first, also as a fantasy fan, I liked the concept of Monster High. Odd monsters with all kinds of attributes and superhuman features. They are a bit weird and “clumsy” with their powers. But if you really look at them they are like dead Barbies what of course is the meaning. If Barbie is making us look strange at our own bodies, I mean these dolls will be the end of us. Yeah, they are monsters – they can look weird but why do they have to take the female bodies into the next extreme stage of fantasy?
You also get different body parts so you can play with them – create monsters, so how come they still all look the same? The same sick ideal. Why isn’t it different sizes on the body parts and different main bodies? How come you can’t build a guy – No let’s just change how a girl look – again.

I think it’s easy to dismiss this and say oh they are just monsters, just simple toys. But the thing is all small input, all the dolls, images and photo’s about how we look and how we dress all the time matters. We store them inside. I don’t want it anymore.

I think I agree with you. Looking at those weird elongated torsos and narrow shoulders it seems ridiculous that they would market them as ‘monsters’. The only thing which seems to not make them look like supermodels is a bit of face paint? Seems a bit silly though. I wouldn’t worry though. No one could read this blog and doubt that you were providing a super cool and creative upbringing. Creativity shines through much more than bits of plastic.

Thanks Ally, and I’m with you. But I do worry cause I can only help my kids in one way but I see what get’s to me. What is deep in me after all the years getting all these images about how women should look like in my face…

My youngest has just started getting into Monster High dolls. She’s almost 11 and I have embraced the fact that she still wants dolls at her age. After going through this stage with my older 3 girls I’m happy to prolong her childhood as long as possible. I agree that the add on and create a monster packs are just a way to make you spend money though. You can get guys by the way.
I actual find myself liking the character dolls though. The amount of detail and individuality that goes into them makes them like little works of art. The back stories and relationships between the characters is good too. At the end of the day they are fantasy I guess. Anything that sparks the imagination can be a good thing.

Isabelle McAllister
– In reply to: Kristy

Kirsty I’d love to prolong the childhood. To play is the best. Here in Sweden I haven’t found boys create a pack only the boy dolls. But I’m glad to hear they are out there. My problem is just that I find the fantasy thing a bit of a decoy. It all comes down to dressing up and looking good anyway. And i don’t know if it really sparks the imagination? Cause they all laid it out for us already? I love all the “girls” plays if I compare to all the fighting and stupid things for the boys. But I’m just fed up with it the looks of it all. The playing with the identity, the ideal of the female bodies….

I don’t want it anymore either. Society is falling apart with all these ideals that are being shoved down our throats. The younger, the better it seems.

I couldn’t agree with you more Isabelle. Thank you for putting this out there for others to question and see. I have no children yet but when I do, I want my daughter to feel like she is beautiful no matter what her shape or size.

I bought a Monsters High doll for my daughter, mostly because I thought it would be different from your regular barbies. But the body was just as ill proportioned. My daughter didn’t play that much with it anyway. My son got a Merida doll for his birthday – she had a much more natural body – and both my son and daughter prefer the Merida one. I asked them about the body shape (they are 3 and 5) and both of them laughed like “that’s not a normal shape”. I think they are too small to get the implications of what the dolls are implication about women/girls. But I’m glad they see that it’s just fairy tale looks.