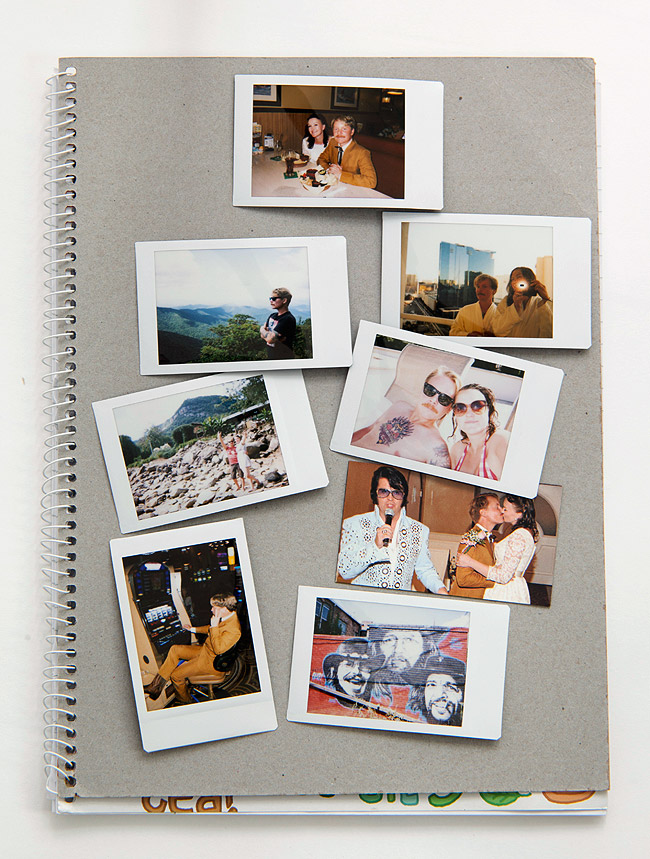 This is my sister Alexandra and her husband Mattias.
The got hitched in Las Vegas last year.  Since I could not photograph their wedding I gave them a polaroid camera so they could cover the event with the help of friendly strangers. Since it is Valentine´s Day today I want to show you some of the polaroids.

There is a whole lotta Rock ´n Roll in this couple and when they told us they were getting married in Las Vegas it came as no surprise. I was a bit bummed about not being able to photograph them but the polaroid camera did a great job. (A Fujifilm Insax Mini)

Alexandra has had her wedding dress for several years, she found it at a thrift shop and instantly knew she was going to get married in it. This was long before she even met Mattias.
Mattias bought his suit at a vintage shop in Malmö called Mani
Then they booked a flight. A hotel room and a rental car and took off

When the couple hit Las Vegas they headed over to the Clark County office for a Marriage License. You don’t have to book this in advance. But you can read more about it here. (When they got back to Sweden they sent it to the Swedish Skatteverket for registration.Read more here!) The license costs 60 dollars.

On the next day they got all dolled up and went to the Graceland Wedding Chapel , where they had booked and paid for the ceremony in advanced. This is a popular place and needs to be booked. Apparently Priscilla and Elvis Presley were going to get married here but when they arrived they realized that this little chapel could not fit their big entourage so they had to go elsewhere.

Anyway.. After registration at the desk they waited in line with the other couples. The ceremony it self was quite quick. Elvis sang “Can´t help falling in love with you” while he walked Alexandra down the aisle.

After the ceremony they had dinner at a restaurant and asked the waitress if she could take their picture. So cute.
They left Las Vegas on the next day for a honeymoon road trip across the USA.

Her clothes: Alexandra wore a vintage dress that she found ages ago. When she first saw it she knew that this was her wedding dress.
His clothes: Vintage mustard colored suit from Mani, Malmö.
Ceremony: At Graceland Wedding Chapel with an Elivis impersonator and all!
Music: Elvis sang Can´t help falling in love with you”. What else!
Rings: Alexandra and Mattias customized old rings that Alex´s grandparents had had.
Honeymoon: Roadtrip US. With one stop in Kansas for a Merle Haggard concert and one stop at Danny Reed´s Hot Stuff Tattoo in Asheville for an “Alexandra-tattoo” on Mattias arm.
Camera: Polaroidcamera Fujifilm Instax Mini.

sounds perfect to me!

Jenny at dos family
– In reply to: Ashley

Yes i think so too.
Just the two of them. Nice and easy.

Looking good ! I love that you’re both wearing karate outfits on the balcony…