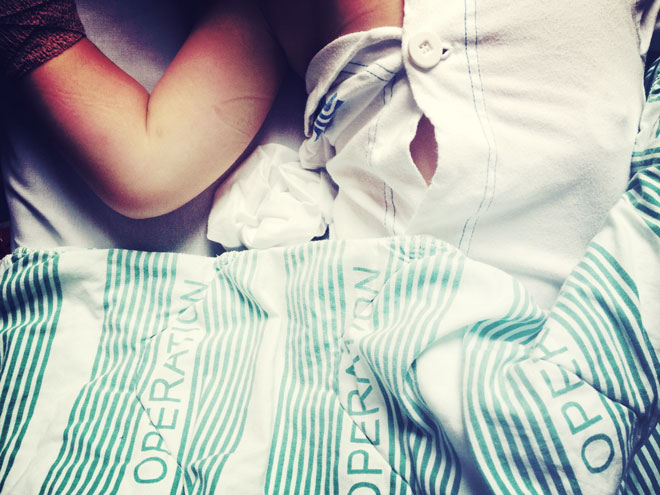 While Jenny and her family has got the flu – I’ve been having a rush start of this fall. Let me tell you some things about it.

The operation
Beppe have had a crooked tumb, a trigger finger and he now got it fixed. They needed him to be asleep so he got some anesthetic. I cried like a baby. Everything is fine and it was all good in a couple of hours. But the time I had in there to think. About the hospital in general, all the stuff that is going on in there. Life, dead, joy and sadness like a miniature fast speeding life that is a hospital and it’s bubble.
But naturally I also thought alot about all you parents out there with sick children. I don’t have any good words for it but I just want to send all my love and I am crossing all my fingers and toes for you all.

The crazy work week
The day after the operation I left to go to the Ikea headquarters down in the little town called Älmhult. It is basically Ikea town. Everyone seems to have a connection to or work at Ikea. I’ve been working as a consultant for them. Unfortunately I can’t show you anything I did. It was great fun but also pretty hardcore and loooong days. The image above is from the last evening at the hotel (Ikeas own – of course). Dead meat.

The crazy work – weekend
One hour after getting back to Stockholm I sat in a car with my family to take the 3 hour ride up to our cabin. It was raining so much it was like driving in a dark swimming pool. Really scary. We were so tired. Then I worked all weekend at a house and building fair. I gave decorating advice and looked at images and drawings from a lot of people. It was fun but after such a week I was pretty beaten up. But I loved being back in the cabin.

The routine is back
Soccer practice, learning to get on without a diaper, work and play. I’m really trying to get it all in. And in the meanwhile having fun. Routines are good but could get dull. What’s your recipe for that?

The party outfit
Time again for the award show Kristallen. It’s the Swedish version of the Emmy awards but in a much smaller scale. Since I always work on location it’s a good place to meet everyone, I kind of ever, worked with. It was fun! Also Filip and Fredrik made a great intro for the show – in a Jimmy Fallon kind of way (you have seen his brilliant intro from the Emmy’s – right?)

The winner!
My hubby Erik works as a comedy writer for the (yeah – comedy) show Partaj and the show won a “Crystal” for beeing the best  (yes you guessed it by now – ) comedy show! Hurray!

The day after
Still tired and a little bit ill. Everyone I know got the “back in school meeting so many people after summer bug” but the positive side is that my hair kind of found it’s best days yet! It’s like I got into a lot of action in bed – knullruffs as we say. Unfortunately this wasn’t the case but still happy about it!

And Hurray for Erik one of the funniest guys on the planet!

Hey nice pics and a very stylish blog.
Could you explain for a german what the word “knullruffs” means? :)

Isabelle: haha I think you understand already but kind of direct translation is “messy fuck hair”!