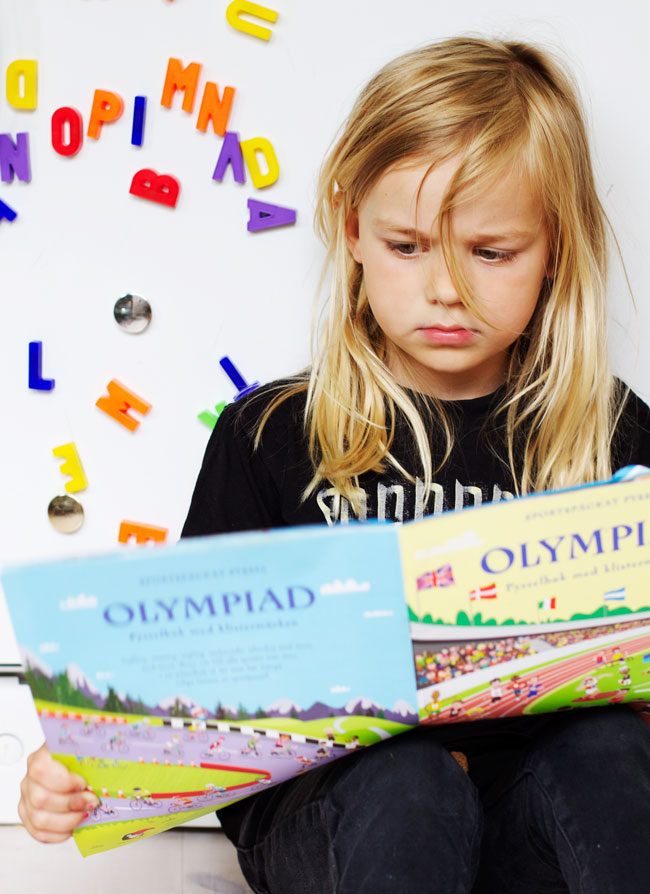 So my 5 year old comes to me and asks.
– Why is it 280 boys in this book about the Olympics and only 26 girls? Why isn’t there any girls in Ben 10, yeah there is one in the movie but never in all the gadgets?
Then she writes “Unfair – guys” on the fridge. I love her for this!
But I still don’t really know what to tell her. How do I explain about this, like how do we explain to kids about all the big issues in life? Like dying – but at least dying is natural. One part of me doesn’t want to tell her – I don’t want her to think about it just yet. Think about it too soon. Somehow believe that she is less worth because she is a girl? But this can happen even more if I don’t show her how unfair it is. So we talk about it and we work for more girl power! And then I simply cross my fingers and hope that it will work.

How do you think about raising you girls and boys? How do we get them to become more equal?
How do we do this together?

I don’t have good answers for you but I can tell by this little girl’s face that you have a powerful girl already! Sometimes my daughter tells me that some boy has told her that boys are braver and stronger than girls.

I told her that is ridiculous. There are always going to some girls who are smarter, stronger and braver than some boys and vice versa. Because people are different. But some people aren’t going to be smarter/braver/stronger simply by virtue of their gender. That’s the basic message I’m trying to get across to her.

I’m not a parent, but I am a daughter who raised me to be strong, independent, and full of girl power. She wanted my sister and I to know that we can grow up to be whatever we wanted to be not in-spite of being a girl, but because I am a girl. I think my mom did that because of her role model (her mom, who was a working mom of six children as a nurse) and because of the experiences she went through. She always tells me of her days in college when she fought administration for equality on campus (men had no curfew, but women had to be back in the dorms by 10). And now she is celebrating the 40th anniversary of Title IX here in the US, which lead to increased opportunities for women in sports. My mom (and dad, he is super supportive as well) never told me I couldn’t attempt something. I might fail, but I would always be given the chance to try it out.
I also work and have worked with kids for a while now, as a therapist, youth minister, and camp counselor. Working at camp was awesome because everyone supported everyone. Also, there I learned that boys and girls have very similar interests, if you let them explore what moves them. I was a drama counselor for a couple of weeks, and every group that came loved the dress up part. Girls loved being princesses, super heros, construction workers, aliens, and everything in between. Boys loved being princesses, super heros, construction workers, aliens, and everything in between. Boys loved making farting sounds and grossing people out. So did girls (who I think were the best at making disgusting sounds because in a camp atmosphere the felt free of societal ideals). We also gave them tasks where they had to work together. Simple team building games. Give them a common goal that everyone has to work on. It brings them together.
I think what also helps kids is having them find their talents and passions, but also help them learn about other people’s talents and passions. The simple, look for the good in others.

Isabelle: thank you Vicky!! What a great mum and sounds like a fantastic camp! Thank you for telling about it it gives me hope and love!

Så uretfærdigt! I sometimes find myself changing the lines of childrens books! Like Snorkfrøkenen being insecure :/
Isabelle: oh I do that all the time. And like swap that it’s not evil stepmums in all stories and weak fathers (like hans and gretchen or snow white or Sleeping beauty) I also leave out that all the princesses are beautiful and have nice dresses and I tell that they are smart instead. Haha I don’t know but I can’t stand it otherwise.

I’m not a parent (yet, someday!) but I already am thinking about this…
I think Melissa and Vicky ^ have good advice.
Teaching kids that everyone is good and bad at certain things, and that it has nothing to do with their gender, is so important…
As for the books…try and find some that have more equality! (not over the top on the princess syndrome, but not too far towards boys are the only ones present…)

Your daughter is smart stuff. ^^

Thanks Jessy- she is smart! And books believe me I do but she gets presents and to be honest it not that easy to think about it all the time. Also all the companies they don’t want to risk making for example pink stuff for boys or blue for girls cause thay are afraid it will not sell. Drives me mad, cause then they are pushing it even further – they are telling everyone how it should be.

My mother passed away when I was 12 and from then on out it was my father’s job to make me the empowered girl I am today. He definitely did a great job! I think it was because he never made me feel that because I liked “girly” things I wasn’t empowered. He just always pushed me to dream, have tons of goals and make sure they were my dreams and goals.