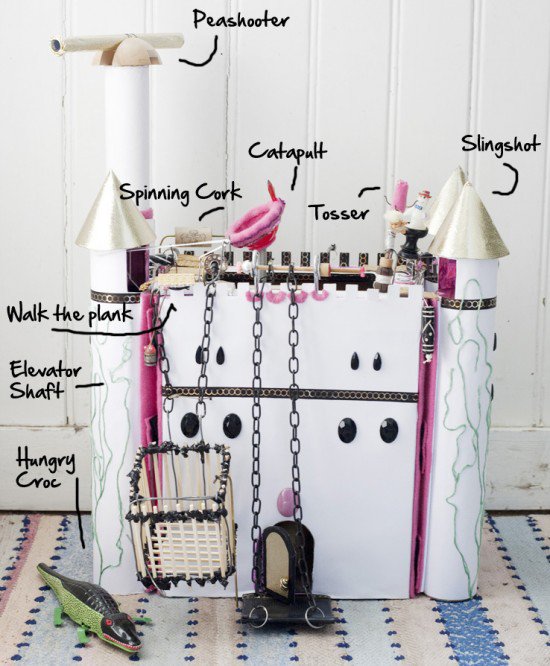 A while back my friend Agnes took me to see her grandmother Lena. At her house I saw a really cool and funny “toy” that she had made for Agnes.
A fort made from leftower items and paper.

If you look past the pretty pink decor you´ll find different gadgets and instruments that looks like something out of Henry The 8th torture chamber.
So watch out, if you don´t play nice you might end up walking the plank!

Lena found the little participants at a fleamarket, I think they are originally from an Kinder Egg.

When they are not beeing tortured they are neatly stowed away in one of the towers.

You had it coming Mr Dracula. You didn´t honestly think you could get a way with centuries of sucking peoples blood without getting punished for it.
-Agnes pull the string and set him off flying!

Lena has invented so many creative solutions for “getting hurled off the fort”. How would one choose which one to go with?

The catapult. Probably takes you the farthest.

Or the Slingshot. On the first try Agnes missed the exit and set the cat off -flying straigh into the wall. OUCH!

The elevator takes you to the Crocodile.  A slow ride down to a certain death.

“Walking the plank” takes you to this cage that eventually hands you over to the predetor in the ocean.

There is just no safe way out.

This is soooo cool! Can imagine how fun it most have been to make it!

Yes I know this is great, and I knew you´de like it too

[…] spotted this on Dos Family and had to bring it to you.  It’s a (vintage) handmade castle with deceptive feminine […]

If a child can’t learn the way we teach maybe we should teach the way they learn.

O.M.G you take building cardboard castles to the next level.

Amazing, thank you for your inspiration…..