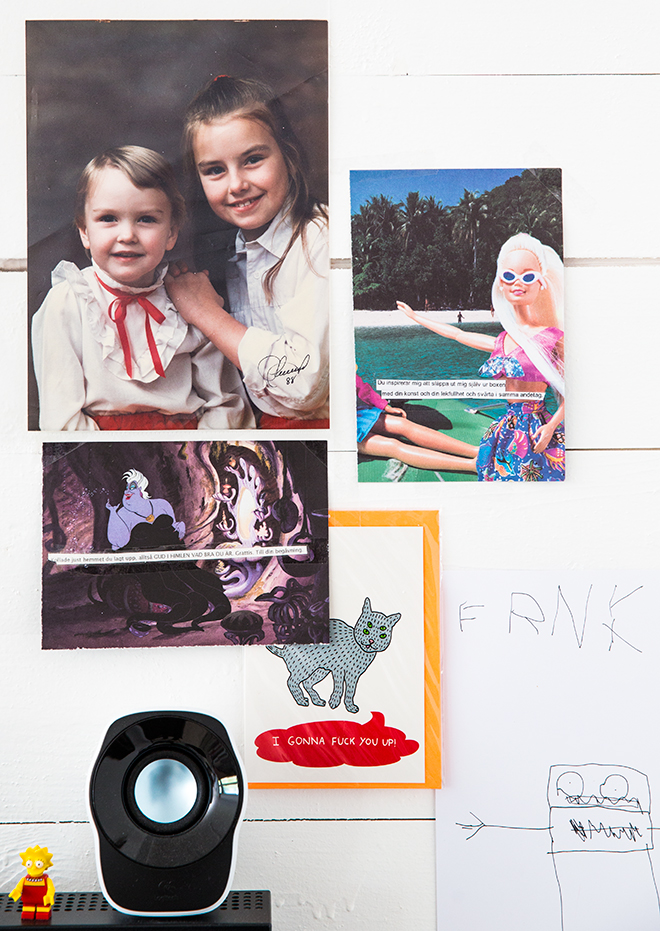 Above my computer screen: A 4-eyed cat. A robot that Frank made. My sister and I posing for a photographer. And compliments. Yes you heard me right. Compliments.

You know the feeling: one mean-spirited remark weighs more then 100 compliments? I know this to be true because I used to feel that way.
I used to be really dependent on other peoples approval. The not so nice comments used to linger on me forever while the nice ones bounced off me like they were nothing.

Getting older has many advantages. Seeing you´re own bullshit is one of them. Today I don´t let my brain or heart overlook the compliments. On the contrary- I suck them up with a pink straw, print them out and even use them in my crafting. Like above: one comment has been integrated in the book “Barbie’s adventure in the Caribbean” and the other one is encouring (not only me but also) Ursula in the scen when she´s planning world domination.

With my age I’ve also learnt that the most important opinion regarding my work is my own. If I don’t like it- it’s probably crap. If I like it- I´m on the right track.

However giving the nice compliments more room then the bad ones is a pretty good routine.

admin
– In reply to: Malin

admin
– In reply to: Malin

Hi Jenny, just wanna let you know that you being you is just the way we like
And it’s amazing how that little Jenny from the picture looks still the same!

admin
– In reply to: Marie