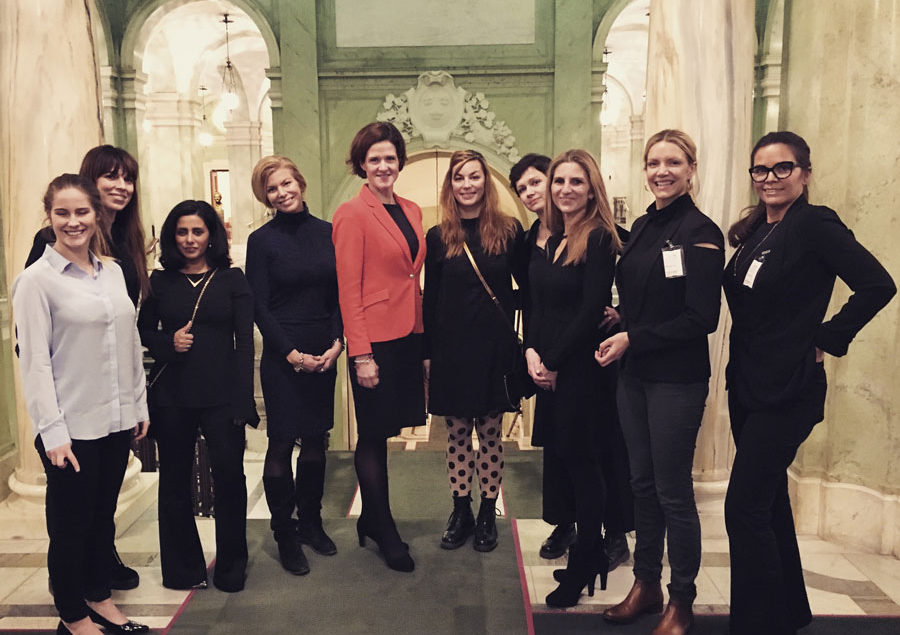 Before x-mas I got a formal invitation to an informal dinner at the Swedish Parliament. It was Moderaternas leader Anna Kinberg- Batra and Helena Sandklef that invited us to an evening to talk about feminism and womens rights and roles in the world.  I didn’t know who else would be invited or really what the evening would be about before going there. And even though I never voted for Moderaterna or even like their way of doing politics in most cases I thought it would be a great thing to talk with everyone included about issues that counts for every woman. And also see what unites beyond different political views.
In the end I actually knew some other women at the table like Johanna Swanberg, Clara Herngren &  Annika Leone and I thought it was a great dinner.

This would be so much easier to write about in Swedish but I hope you bare with me. We talked about Kvotering  – I’m all for making a law to spilt our parental leave 50-50 between the parents to help women in their careers but also help the men to stay at home with the kids. I believe that’s a very good way to reach gender equality and no I don’t think the kids will suffer since they will be with their dads who I think are even capable to take care of the kids as us women.
We also talked about hatred against women on the internet. What schools could do to help girls and boys not to get stuck in old way of looking at genders and what it means to be a woman or man. We also talked about our personal experiences and ideas. I think it was a very interesting and good evening.

We also got a tour of the parliament. This part used to be riksbanken. Actually they used to have everything within the parliament a travel agency, bank, restaurant, shops – you simply never had to leave.

Everywhere there was lots of art with men portrayed so they made a womens room in 1989.  This photo is of Kerstin Hesselgren – the first woman in the Swedish Parliament 1922 . Or if you read this she was one of the first 5!

There is also many busts around the Parliament. Of men, of course. And the longer they held their posts as leaders the bigger the busts. I really liked the style of Olof Palmes. Love the bangs!

Anna Kinberg- Batra walking in maktens korridorer  – the halls of the powerfull.

Feminism is something I never get tired of writing about or fighting for. So I’m happy to make my voice count where ever it’s possible.
Thank you for having me!
Isabelle

isabelle
– In reply to: Elin