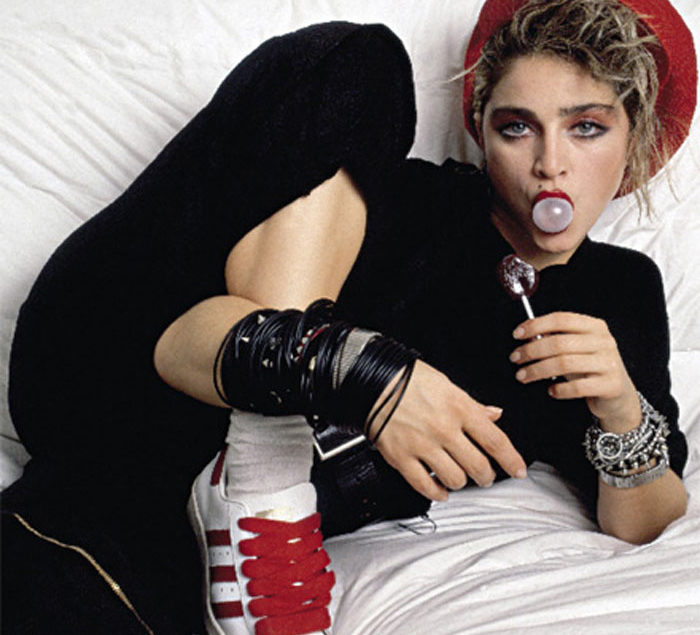 “-Do you wanna go to the Madonna concert? We have a leftover ticket for you!”
I thought yeah why not. It used to be a dream I had. Long ago and far away. But then something happened. Maybe it was just her music that didn’t get to me anymore or maybe just life or all those crazy articles about her getting older and more crazy. Well naturally she was still MADONNA forever and ever in my heart but it was not the same.
But boy was I wrong. I think I just simply been mislead or I don’t know but I’ll try to understand right now.

Image from the concert in Stockholm by Christine Olsson/TT

I stood in the audience waiting, we had excellent tickets – right by the stage. I kind of felt young below middle-age at least, that doesn’t happen very often anymore. The concert started. The stage filled with like a million dancers, large screens with cool videos, crazy scenography and the queen herself came down in a large cage. She sings a couple of new songs that I don’t know and the sound is pretty bad. With a base so loud my nostrils are vibrating. The show is cool but I already start to think about my bed…

But then something happened. I don’t know how to put this but for me personally it was like it all made sense. I’m not a concert person and never been a huge fan. But I think I just became one. Madonna gave everything on stage – it was like witnessing the someones first & last concert in one. Like she did everything so that just me out of the 45 000 in there would never forget. For 2,5 hours she went on & on & on. You can hardly see she got tired in the end. Amazing. But what hit me the most. After Paris, Friday and all other crazy stuff happening in the world she has always been way ahead and so damn political.

Even when many of us kind of let her go – journalist claiming her getting old and asking themselves why she’s still grinding and taking her clothes off etc? People calling it blasé and I felt a bit the same. I respected the old but dismissed what she had become. At the concert it all hit me. Why should she change? For whom? I think I got fooled by the things that fools all us women. The idea put out there that at a certain age we shouldn’t feel sexy, or show our bodies or do as we please. Damn every woman that does this. We should become mothers and happy with being just that. We have a due date. And it comes like a sledge hammer – not like a cool wrecking ball with a naked Miley Cyrus on top. I feel it to – how suddenly I become more and more invisible.
(update: One of my readers pointed out this interview with Madonna in the Rolling Stone when she talks about ageism – read it here! And thanks for the tip)

For Madonna  I think she just simply went on & on with her mission.  And watching all the images/videos on stage of all her 1000 personalities/styles over the years, watching the dancers in costumes linked to both religious but also folklore themes, the crucifixes, the battle with the not very holy catholic church, the love for all colors and  genders. It was such a powerful thing to see – to realize the amount of stuff shes fighting with and against. How much she is and always has been a game changer. It was totally beyond cool.

And again – just because she’s a woman her acts of being provocative and somehow rebellious are being looked upon as lesser worth. It’s so damn sad and crazy. Like in every text, even this one –  it’s about age.

This text above is taken out the review in Dagens Nyheter. And naturally he had to end the review of her show by mentioning her age and that no other female artist in her age is a threat. Well of course a man had to make it a competition again between women and talk about age something he would never do with a man.
And just think about it- it’s not many men out there who can put on a show like this.
Period.

Thank you Madonna for being you!

I’ve always loved her. I saw her in concert in the late 2000’s, and it was the best concert I have ever seen.