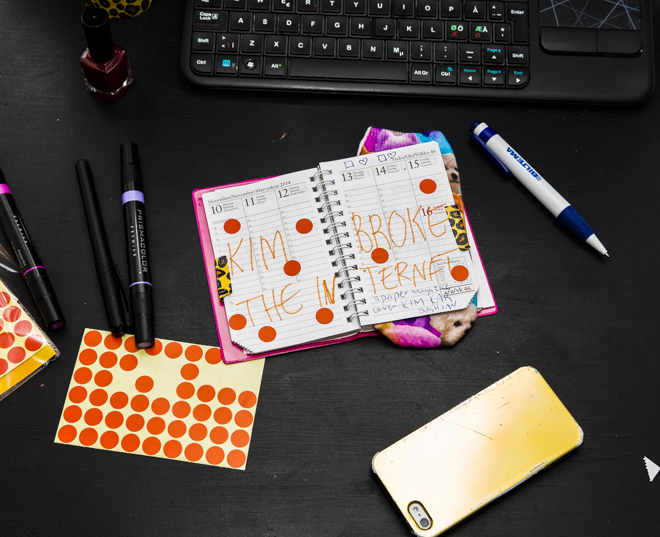 I have a diary. I fill it with things that´s happened in my daily facebook feed.

I write down what people are talking about, what they are linking to and being outraged over. Mostly stuff that stands out and gets linked by many, like the Emma Watson UN Speech, but also random cat videos, heroic acts and missing people.
Imagin in 50 years or so, I´m in a rocking chair reading my facebook diary for my grandkids.
I´ll tell them that in October 2014 Facebook was mostly about Ebola, inappropriate Halloween costumes for kids and lots of discussions whether or not Twin Peaks is coming back. It really got out of hand after David Lynch´s tweet “That gum you like is coming back in style”.

I´ll tell them about how Kimmy broke the internet in November of 2014 and how her beloved Caitlyn Jenner broke it again in June 2015.

I keep it by my computer, close to the action.

Here are some other random post I find in it:
20/5 2015 – Lots of links to the Justin Bieber –  Carpool Karaoke video with James Corden. I was already a Beliber when the carpool video came so I was very excited.

Close to Christmas Facebook reminded us how to recycle tea-lights with the shocking headline “YOU ARE DOING IT WRONG!”. Put your trust into Facebook, she is always there to guilt-trip you about what you eat, what your kids eat and how your lack of excercise will ruin you. and other stuff like that.

But even though Faceboook is such a goody-two-shoes I really like spending time there.

Thank you Facebook for giving my brain a well deserved break several times a day, keeping me informed about the latest Kardashian gossip, and showing me the best and worst of Youtube.  Also I´ve found an old friend who I chat with so frequently we even have our menstrual cycles synchronized now.
(Insert the emoji of two girls dancing, each wearing a leotard and bunny ears. You know the one.)