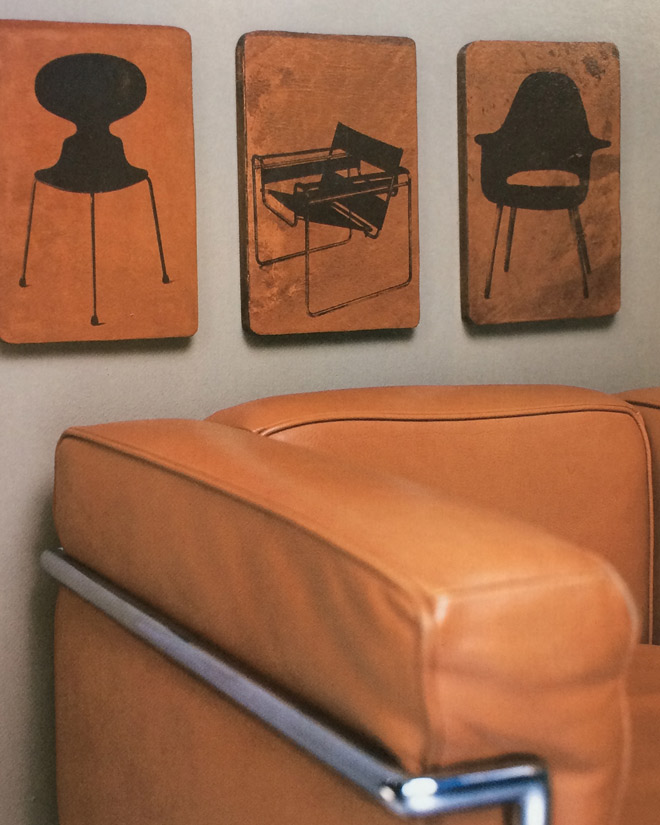 Since we’ll be moving houses in January I’ve started to go through some of my stuff and then I  found these old DIY- pages called Skaparlust in the magazine Sköna Hem that actually was some of my first jobs I did when I moved back home from Belgium in 2002. I still think it’s a good idea.

To do photo’s on leather I simply printed photos on t-shirt transfer paper and the ironed it on the leather. Do not use to high of the heating rather go over it for a longer time. You can use leather from a leather skirt or old jacket or just buy a piece of it whole. I glued the leather on wood to get a nice kind of frame – mounted look. I used cheap wooden cutting boards that had that round feeling to them allready. Then glued the leather on top and simply cut of the excess when the glue is dry.

For the same magazine I also did this make a photo frame lamp DIY.  I used a lamp from Ikea that the don’t sell anymore but they do have a similar one called Gyllen. I printed the image on over head paper but I think you can print it on normal paper as long as it isn’t labeled on the back (it will shine through). I bought two pieces of plexi that fitted the lamp. And put it up in stead of normal printed plastic/glass that makes the lamp…

I still look the same! Don’t I?

DIY – Print photos on leather | The blog of COOPER APPAREL. Find us at https://www.facebook.com/Coopertees