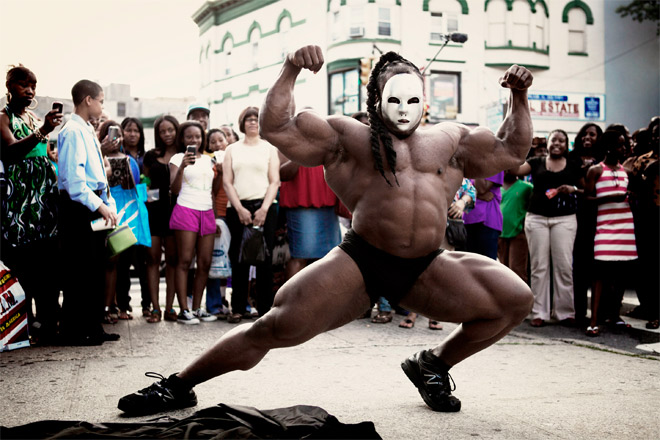 This weekend the Bodybuilding championship Mr Olympia 2014 takes place in Las Vegas. I woke up in a panic. “Jenny!! You forgot to talk about the documentary “Generation Iron”.

You´ve all seen the “Pumping Iron” documentary of Arnold in his golden years. But have you seen the documentary of the body builders of our generation? Before the new champion is announced this weekend I really think you should watch it.  See trailer below.

The documentary follows the contenders of the Mr Olympia title of 2013. It´s about their training and their thoughts. About the top ranked guy, Phil Heath, with the fancy cars who´s living the dream life vs. the underdog from a small apartment in New York, Kai Greene, he who changed his thug life into a life of bodybuilding, street performances and art. Yes you´re right this does sound like the modern version of Rocky 3. (the best of the Rocky movies in my opinion)
And it sure is.  Clubber Lang (MrT) was never into art but he reminds me a lot about Kai Greene, and Phil Heath sure is Rocky.

All the pictures in this post is of the fascinating Kai Greene.  Just look at the way he chooses to portrait himself. Everything else in Bodybuilding looks the same: miniature underwear and a whole lot of bronzing oils and poses you´ve seen before. He does to body building what Lady Gaga does to pop music.

Even though I love this guy my heart goes out to another contender this weekend. Victor Martinez is the one I´m routing for. There is not as much to say about him as there is Kai Greene but I really think he is a nice guy who has been dealt a few shitty hands his life.