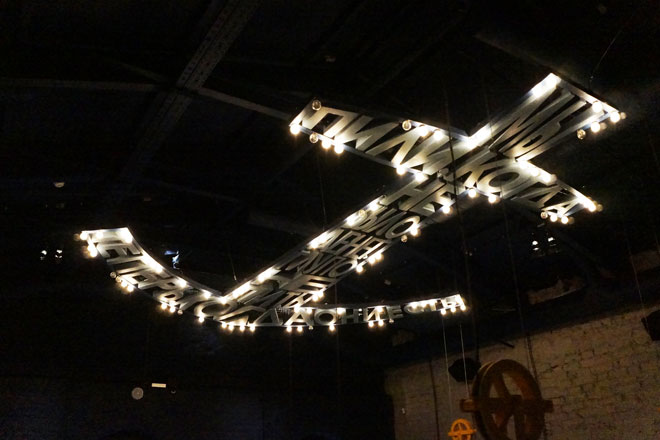 First evening in Moscow we went to a restaurant called Odessa Mama. It had this marine theme but in a great way (soemthimes I think the classical marine theme gets a bit tacky) and Ukrainian food. This anchor ceiling light says: We drank when we were poor so it’s stupid not to drink now!

The place had a great ambiance! And yes we are spaming photo’s from Moscow but we can’t help ourselves. So much to show and tell.

These benches and flower stands are not that hard to build yourselves actually. Think Jenny will try this summer.

Great Alexis from Note Design who also gave a talk at the design festival and Nastasia who works for seasons magazine and who was our own little fairy that fixed everything for us in Moscow. Big kisses to her!

Jenny found some free Wi-FI – there is free WI-FI in every bar, restaurant, shop and metro car in Moscow. Very nice for addicts like us.

The food came. The fish looked fishy but where tasty.

Someones birthday. We think. The place started to boil!

I love this glasses and got very excited they of the thought of them being old basic Russian ones. But it said Duratuff U.S.A imprinted at the bottom…

I also love when people sit next to each other and eat instead of right in front of each other.

Cool way of hanging the lamps.

and the other with red.

The back wall was a container.

And inside the container was the rest rooms.

Thanks for a great night out!

love you girls! and miiiiiiiiiss you so much! )

Oh my, that seems like a lot of fun.
Now I want to visit Moscow just to be able to go to this place :-D