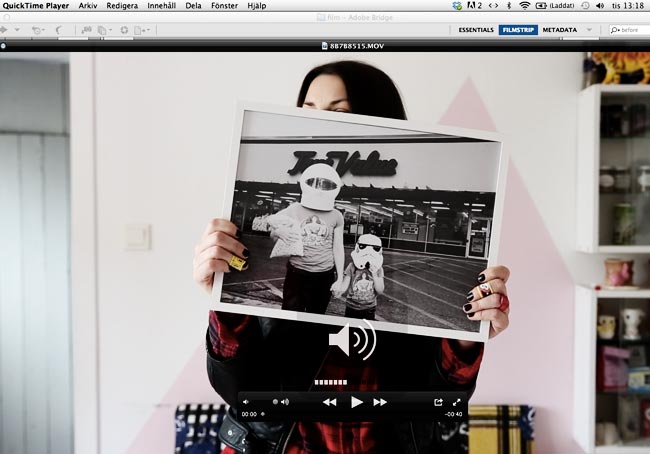 Hey crowd!
This week Jens and I have been busy making a promotion video for a project of ours. We have come up with a product that involves my photos. Nothing big but still pretty darn nice. But before we put it into production we want to see if anyone will be wanting to buy it.

(I will show you the product and the promotion video later this week.)
You know what crowd-funding is right?
We want to get our project up and running with the help from you. We are hoping that the crowd (you) will be willing to pre-order this product so we can put it into production in time for Christmas shopping.

We are using Indiegogo and we will launch it later this week.
This is the first time we are trying this out and it is extremely nerve wracking (what if my mother is the only one who will pre-order?)
and horrible (talking on film about what you want to do is not only hard but also -horrible)
and everything in between.
But also very exciting.

The idea came to us at our kitchen table, while doodling,  in our little house in southern Sweden.
We made a prototype – tried it out – and now , 3 weeks later, a campaign that with the help from you will give us the confidence to believe in the product and hopefully some starting money to make it happen.

now I feel I´ve built up to high expectations.
Jens is sitting here next to me saying:. “They´ll think we have created something mindblowing, nothing can live up to their expectation now.“

So please don´t go expecting anything major here. It´s not the cure for cancer (diffidently not!) It wouldn’t even help you if you have a mild headache. It wont take you to the moon either. Hell it does not even take batteries.

However it might keep you entertained for a while.

Now I wanna know what you are talking about!!! What teaser… “We only tell the half of the story” Muhahaha ;-)

Can’t wait to hear more
I believe its fantastic, since it is made by you!

Jenny Brandt
– In reply to: Julie

Great! All my christmas shopping is now done and all the kids party gifts- thank you!