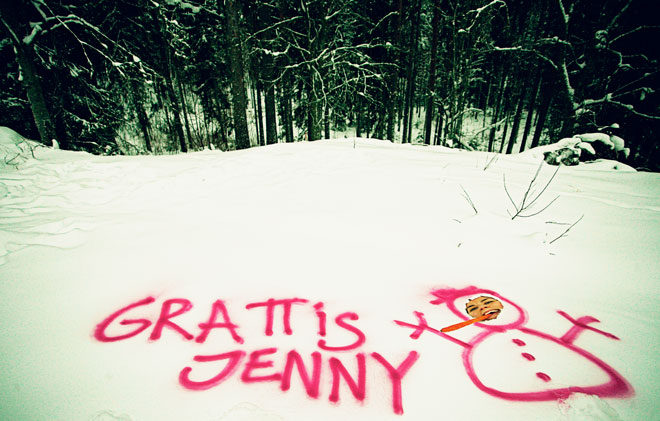 It’s still 11 minutes left of your birthday. I kind of made it. I hope you are having a blast! On the other hand you are still in Nebraska so maybe you have hours left to celebrate! Let’s hope! I had great ideas. I was going to spray paint a nice post cardish greeting for you on the snow. Well I did it but it sort of looks like Bart Simpson ran away and did a really bad graffiti wannabe tag. And then I asked erik to drown me in snow and take a photo. But I guess it would have been better, not good but better if I did it all in photoshop from the beginning… But I guess it’s the thought that counts.

Later when I made my latest addiction – these saffron buns (the trick is to use Kessella). I thought I would make another go. Still not one of my best photos. Reminds me of a friend of mine who was on a BA flight with a terrible landing. When they we’re safe on ground the pilot said in a typical stiff English voice. -Well not of my best landings I suppose but welcome to Lundun. (You have to hear this scenario in your head.)
Anyways- then i spend like 1,5 hours to make a GIF for you but here at the cabin the internet is so slow it has been stuck on 26% upload for 40 minutes now. And I really need to go to bed now.
So this may not have been the best looking or the most romantic proposal but I have been thinking about you all day!
May you live and blossom at least until you are a hundred!
Hip hip hurray!
kisses
i

UpDATE – this is the GIF that was supposed to go up yesterday.
Even this is not one of my best landings I suppose but at least I get a golden star for trying
Lots of love

This is the best birthday salute I have ever seen! Hurray for creativity! ;-)

Ahhh hahaha this is so cute :)

You are the best. Thank you so much. I celebrated in the air. We are back home now.
Kisses partner!

And the GIF is awesome

Happy Birthday, Jenny!! (And what an awesome way of expressing it, Isabelle. :-)