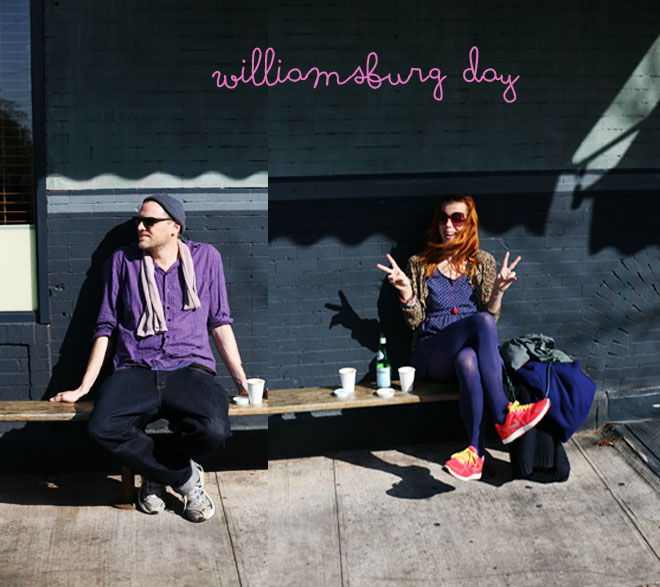 Second day we were awake really early but in a great mood. After a very unhealthy breakfast (I’ll get back to that later) we crossed the bridge over to Williamsburg and suddenly the summer was back!

Since it was so early not much was open but we just walked around the neighborhood and looked at all the hipsters waking up, bringing out their bikes, dogs and going to make their laundry.

I asked Erik if we could get away with beeing New Yorkes. He said no – we have too practical shoes and we are posing too much next to street art.
Say what? I’m not standing I’m doing some crazy really new yorkan cool jumping off benches next to street art.
Bah, Erik doesn’t know these things.

We also went by Erik’s cousin – artist Mark Strathys studio and went for some Korean BBq with him. It was fun. Since Erik’s dad is from Seattle there are pieces of the McAllister clan to be found around.

In his studio I found this great plate. And also Cambell’s made Andy Warholian tomato soup cans as a special 50th anniversary edition apparently sold at target. What a fantastic idea!

We also watched some Sunday softball in the park.

At five a clock the Whyte hotel open their rooftop bar and we had a drink with a view. The Whyte hotel is great just check it out here.

To not fall a sleep at 1900 hours we went to the movies but everything was sold out except the RZa movie The man with the Iron fist. The thing was I just read it was a Quentin Tarantino movie and thought ok whatever this will be ok. But it wasn’t his movie and t it was the worst movie I ever seen. We walked out of there after 10 minutes. Oh my – Rza please go back to making music!

Jenny Brandt
– In reply to: Chatrin

Isabelle, I think you could pass for a New Yorker! (I’m not from there but my parents are so I’ve always considered it to be my home-away-from-home.) I can also attest to the fact that, underneath their cooler-than-thou exteriors, most hipsters really wish they were Swedish and living a life like yours in Stockholm. (Really!)

I always enjoy reading your blog but I’m especially enjoying your ‘outsider’s take’ on NYC: for example, I would have never thought to photograph the drugstore hairband lollipop like you did but it *is* a neat thing to see and share. :-)

In July, I’ll be visiting Stockholm (and also possibly Uppsala/Malmö/Copenhagen/Odense) for the first time and have been looking through the site archives for ideas. For example, I hope I can purchase some copies of Alla Balla Kalasprylar for myself and friends. You and Jenny offer such a nice slice of creative and colorful life in Sweden, and I appreciate the inspiration.

I hope the rest of your trip is a blast!

FAB Isabelle. Just rockin!!! The blue tights and red sneakers? Your killer hair and glasses, all the colors…NYC?? Paradise!