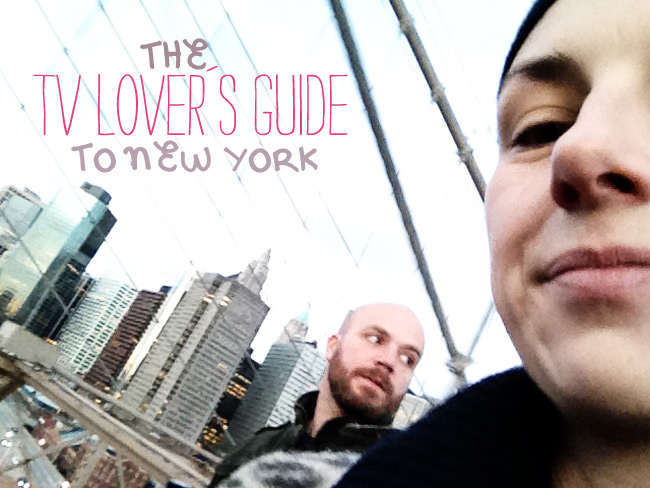 Last December Jens and I went to the big apple , just like Erik and Isabelle are going to now. But unlike them I had never been there before. Since I was sure just being there would be plenty I booked us at a no frills hotel, located close to ground zero and it worked out fine. It had a TV, bed and bathroom and a coffee place just below.

Since we are big TV nerds we saw New York trough our TV-distorted eyes. In this post I will tell you about some of the things we did, many of them did not even cost a dime. Warning: If you don´t want to look like a total tourist stay away from these tips.

Ever since I was a little girl I´ve collected knowledge of New York through watching stuff like Desperately Seeking Susan, Working Girl, Green Card and Coming to America and  Saturday Night Live. Last winter Jens and I packed all that knowledge into a duffel bag and flew to Manhattan. We got in late at night and fell a sleep while watching the local news.

Take advantage of the jet lag.
We woke up at 4 in the morning on the first day. Happy and totally psyched . We headed out and walked all the way to Times square. On the way there we stopped for Coffee at Starbucks (were there is free WiFi). The nice thing about being out early is that we arrived at times square just as all the morning shows were filming. You can stand outside the big windows and see it all. I was so star struck by the cast from Downtown Abbey I almost spilled my Caramel Macchiatto all over  Robert Downey Jr. stepping out from Good Morning America to promote his latest Sherlock Holmes movie.

Q: Wont this make me look like a tourist?
A: Yes! – don´t worry you will not be the only one!

NBC Studio Tour, Rockefeller Plaza
Then we headed over to Rockefeller Plaza. This is an iconic place. Just standing next to the huge Christmas tree will take you straight to a 30 Rock episode and you instantly feel the urge to ask Kenneth for a favor.
We shopped for Tina Fey T-shirts and Chris Farley coffee mugs in the NBC experience  shop and then headed upstairs for the NBC Studio Tour. It was nice. It was us and some equally excited people mostly from the Midwest. No pictures allowed though. We saw the studio of Jimmy Fallon, Saturday night live and more. The best part were the guides though. While dressed as Kenneth they told us some behind the scene info and made jokes on popular culture. They accused Jens and I for being “Dr Oz-haters” when we said we had not seen the show. It was funny.
PS: For info on how to get tickets for Saturday Night Live go here!

Q: Did you see any celebrities ?
A: No, but the Guide told us that last week his sight-seers had seen Jimmy Fallon. Lucky bastards.

Ghostbusters
One morning we walked to Tribecca. We had a few goals: To see and to touch the Ghostbuster´s firehouse ( North Moore Street)…

..and to buy a lottery ticket like Cage does in “It could happen to you” and to eat at a diner. We knew that the diner from that movie was built only for the shooting and then torn down. (N. Moore St. and W. Broadway)…

..so instead we ate at Square Diner. Were we had an all American breakfast. The owner seemed to know most of the guests and asked things like: “how is your mother doing in her new home” and “Did you get your Tv installed yet?” So it felt like we were in the middle of a Cheers episodes.

Q: Did you split the lottery ticket with the owner?
A: No, It was a no-win.

Go Desperately Seeking Susan at Battery park.
Even though I had planned to sing this on a ferry passing the statue of liberty Jens and I skipped it. It was really cold that day and as usual I was poorly dressed. So instead we bought some pretzels and a morning paper with personal ads and cuddled on a bench at Battery Park. We ate pretzels and read the personal ads desperately looking for someone like Susan.

Here are some other things you should try:
Catch a cab– it instantly makes you feel like a cool person.
Walk the Brooklyn Bridge at sunrise. (again: the jetlag will totally mess you up-take advantage.) We did, click here!
BRING GOOD SHOES! Everyone told me, but did I listen? No. And after just one day with all that walking I was sure I had permanently damaged my knees.
If you need help finding your way? Ask a Police officer. They will help you with stuff and call you Miss, Ma´am or Sir while doing it.
Stay in your room! Buy a Pizza and beer and watch a movie in the hotel room one night. There is always something good on! We watched Manhattan.

10 post from our trip check out tag “New York”

I love it! The one and only time I went to New York we did a similar thing and we also did a foodie bucket list of New York. I heart NY!

Jenny at dos family
– In reply to: Katie

Oh sounds fun. Do you have à link to it?

This is the best guide. Ever! Hatten av och puss på det

Jenny at dos family
– In reply to: Isabelle

Jenny at dos family
– In reply to: sofia på mokkasin

A New York State Of Mind | curate this space

[…] In 2008 I took Kathy over, her first visit Stateside and I forgot about work and my previous trips. I wanted to see the city with new eyes, tourist eyes, experiencing it with my wife as if I’d not seen it before: strolls in Central Park, street food from sidewalk vendors and reliving some of our favourite moments of movie history, much like Jenny from Dos Family shared in her post here. […]

I love it! It inspired me to jot down some of my own thoughts and pics from my last trip there in ’08. All your posts are making me green with envy! I posted my post and link back here: http://www.curatethisspace.com/a-new-york-state-of-mind/

Fun post, as a New Yorker now living in Sweden it is fun to see the city through your eyes! Was it just the two of you or the kids too? We were there last December as well and it was the first time (we’d been to Cali with them) and I was so surprised at how easy and fun everything was with them! Although if it was your first time… maybe it was more fun with an adult only trip?!?

Jenny Brandt
– In reply to: Theresa

Yes it was only us and it was wonderful. But next time they are coming with!
I’ve heard that ny is great w kids but we really needed some alone time!