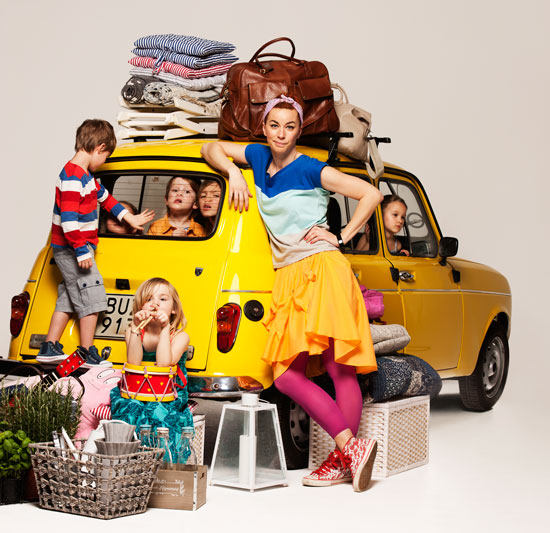 So Jenny showed you the commercial I was in here and you also can see it here.
Also watch an even longer film and read about my tips for decorating the summerhouse over here at Åhléns.

It’s funny that your comments where that you found me talking fast. In the commercial is like I’m in slow motion – thats how fast I speak otherwise. I have tried all the giving speeches trick and read all about how apparently nervous people talks fast but it’s simply how I do things. Fast. And also because apparently I feel I have a lot to say and if I talk fast I can squeeze it all in.

Anyways we taped and took the stills in March. Della was with me. She’s the one with the drumsticks in her nose above and on the roof in the film.

Dellas wardrobe! She was over the moon with excitement!

Della learned a trick to see if the nail polish is dry. Simply push the nails togehter if they stick they are still to wet.

I have been part of big shoots and live TV shows but there was so many people involved in this commercial. First one room for all the stills the the car was moved to the filmstudio next door. And photographers, assistants, ad people, the client- people, catering, stylists etc. I never seen so many people for one shoot.

Apparently they found it a small shoot. Well – OK. I loved it though – it was fun!

It’s also fun thinking that the TV shows I have been doing we are maybe 5 people tops in one crew and then it’s broadcasts just back to back with the commercials! And also being watched by over a million viewers but such a different way of working.

I would have loved to keep the car.

After long hours filming this is what I look like.

In Australia I drove a yellow mini! It was fabulous!
(when it worked)
:)