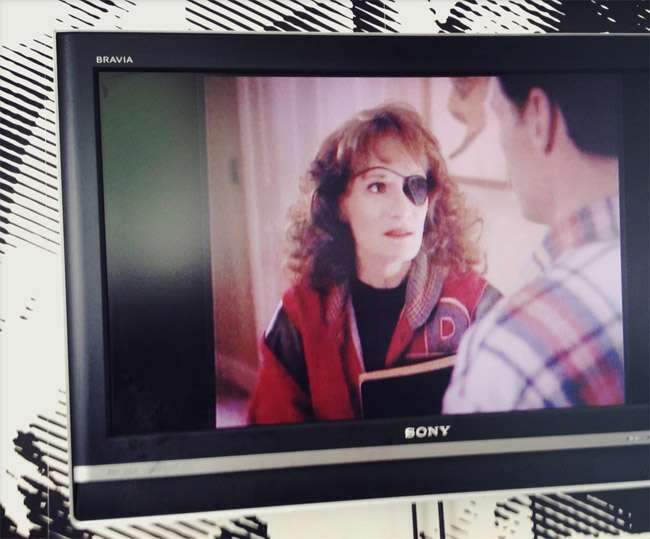 We don´t shoot a lot of fashion here at Dos but if we did I would do a whole photoshoot with models wearing an eye patch. There is something pretty awesome with people who wear them. Not only does it look great but it also gives you a bit of bad ass attitude. Like the little Dos girl in our new header. No one in their right mind would mess with her!

Here are some people you shouldn’t mess with either..

Nadine of Twin Peaks. Not only is she strong and awesome she also invented the silent drape runner.

Steve aka “Patch” of Days of our lives. He has a violent temper but always acts on what his heart tells him. He has cheated death and is married to his soul mate.

John Wayne in True Grit. When Mattie Ross looked for a man with grit this is who she found.

I know what you are saying: “Crispin Glover did not wear an eye patch in Willard.” and you are right: he didn’t . But he is the kind of person that should wear one, always. (I wasn’t to crazy about the Alice In Wonderland-film where he did wear one, so I decided on drawing him one instead. Above)

Such an handsome human and even more handsome with an eye patch.

There are many other cool people patching it! Who is you favorite?

The Dos girl is probably my favorite… or maybe MacKenzie Crook in the Pirates of the Caribbean series ;)

Aaaaaaaand……THIS IS WHY I LOVE YOUR BLOG! The Dos girl. Definitely my favorite. Closely followed by the chick from ‘Twin Peaks’. Thank you for making me remember that wonderfully crazy show. :)

Judith! Yes of course! a pirate, how could I miss that category of patching people.

Melissa: Thank you so much, your comment makes me truly happy.

Heidi
– In reply to: Jenny Brandt